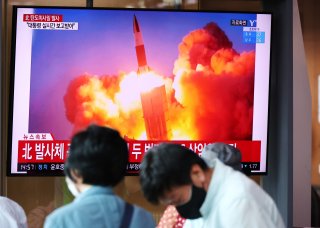 North Korea said on Thursday that it successfully launched a hypersonic missile earlier this week, marking the second such test since September.

North Korean state media reported that the missile launched on Wednesday was a “hypersonic gliding warhead,” including photos to show that the missile in question matches a weapon shown at a previous Democratic People's Republic of Korea (DPRK) defense exhibition.

“The successive successful test launches in the hypersonic missile sector have a strategic significance of accelerating the task of modernizing the national strategic force suggested by the 8th Party Congress and completing the most important task among the top five tasks in the strategic weapons sector of the five-year plan,” state news outlet KCNA said, adding that the missile maneuvered about 120 kilometers and “precisely hit” a target 700km away. Able to travel at speeds upwards of Mach 5 (6174 kilometers per hour) and more maneuverable than their traditional counterparts, hypersonic strike weapons are believed to pose a significant threat even against advanced missile defense systems. The tests, if confirmed, would make North Korea one of five countries—the others being China, Russia, India, and the United States—to be actively involved in developing, testing, and producing hypersonic missile technology.

Ankit Panda, a senior fellow at the U.S.-based Carnegie Endowment for International Peace, said the hypersonic missile tested on Wednesday is a different model from the one tested last year. “They likely set up at least two separate development programs. One of these was the Hwasong-8, which was tested in September. This missile, which shares a few features in common with the Hwasong-8, is another.”

U.S. Secretary of State Antony Blinken condemned the test in a phone call with Japanese Foreign Minister Yoshimasa Hayashi on Thursday. “We take any new capability seriously, and as we’ve said, we condemn (North Korea’s) continued testing of ballistic missiles, which are destabilizing to the region and to the international community,” added a State Department spokesperson, according to CNBC.

Nevertheless, experts have signaled skepticism over the maturity of Pyongyang’s hypersonic program. “A hypersonic missile that can defeat advanced missile-defense systems is a game changer if a nuclear warhead is mated to it,” Drew Thompson, a former U.S. Defense Department official and a visiting senior research fellow at the Lee Kuan Yew School of Public Policy at the National University of Singapore, told CNN after the September test. But, said Thompson, “that’s a huge if. Having it and wanting it are not the same thing.” Cheong Seong-chang, director of the Center for North Korean Studies at the Sejong Institute in South Korea, added Pyongyang will need to conduct further tests before it is able to field the weapon. “North Korea will need at least two or three more test launches in the future to complete its hypersonic missile,” he said.