Welcome to the Club: South Korea Now has a Submarine Launched Ballistic Missile 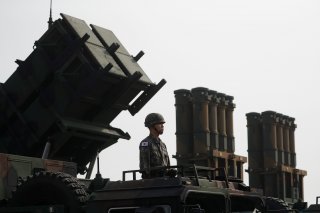 Although the Korean Defense Ministry in Seoul would not officially confirm South Korea’s recent SLBM development, Yonhap did quote a South Korean ministry statement that said the South Korean “military secures advanced high-powered military assets to ensure peace on the Korean Peninsula by building strong military capabilities, and plans to continue to develop them.”

The missile in question is said to be a variant of South Korea’s Hyunmoo-2B, a solid-fueled, ballistic missile with a range of three hundred to five hundred kilometers depending on payload configuration. The new SLBM is purportedly called Hyunmoo 4-4.

The first of South Korea’s new class of submarines entered service just last month and is slated to be the first of nine submarines. Though not particularly large compared to some of the other SLBM-equipped submarines in service with the United States or Russia, they are the largest domestically-built submarines the Republic of Korea Navy has ever had in service.

Although the new submarines are not nuclear-powered, the diesel-electric subs are equipped with high-performance fuel cells that enable long periods of cruise time underwater when a submarine is most protected from surface vessels. Paired with South Korea’s new SLBMs, they’ll be a very powerful platform.

Submarine-launched ballistic missiles are a potent weapon. Hidden away underwater, SLBM-equipped submarines can travel very quietly underwater and lie silently in wait until an opportune target presents itself—or order from upper command orders a surprise strike. Fielding a viable SLBM is, however, a significant engineering challenge.

Mating a domestically built and designed submarine-launched ballistic missile with a brand new submarine also built at home is a significant achievement for South Korea. The Republic of Korea Navy can now enjoy independence from foreign submarine and missile spare part sourcing and servicing. The fact that both systems have been built at home ensures smoother interoperability than could otherwise be achieved. Put together, South Korea’s ability to keep North Korea at bay is set to expand.