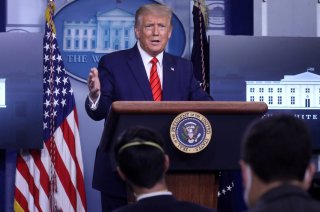 President Donald Trump recklessly risked war over North Korea in 2017, but then appeared to make relatively good use of that scare by starting a negotiation process with Kim Jong-un the following two years. Unfortunately, the momentum is now gone, and we are back to almost where we started three and a half years ago. At least North Korea is not testing nuclear weapons or long-range missiles right now, but it could resume those tests—and it has never stopped building more nukes. The next president, Biden or a reelected Trump, needs to break out of this logjam.

There is a way ahead. Rather than pursue complete elimination of all of North Korea’s nuclear capabilities, the Trump administration would aim for a more modest trade as at least an interim step. It would require North Korea to verifiably dismantle all capabilities it possesses to make more bombs in exchange for a partial lifting of the sanctions which have driven North Korea’s economy into the tank.

The terms of such an agreement would follow logically from the February 2019 Trump-Kim summit in Hanoi, where the North offered to dismantle some of its nuclear production capability in exchange for a lifting of all sanctions, and where President Trump then walked. Washington’s new proposal would simply toughen and improve the terms of this kind of trade, requiring the dismantlement of all plutonium and enriched uranium infrastructure in exchange for a lifting of some of the sanctions.

Provided that verification is good and that some sanctions are retained even after such an agreement was struck, this would be a smart deal. It would not be perfect, and would not achieve the complete denuclearization of North Korea that Trump initially insisted upon. But it would identify, and pursue, the intersection of what is realistic with what is desirable. It would reduce the risks of war and limit the damage done by nuclear proliferation in Northeast Asia.

North Korea has an estimated 20 to 60 nuclear bombs today, and is still making more as best we can tell. It views those weapons as the proud legacy of Kim’s father and grandfather, and the ultimate insurance that the younger Kim will not suffer the fate of Saddam Hussein or Muhammar Qaddafi, both of whom wound up dead after fighting the United States without nuclear weapons. It is hard to see North Korea giving up those bombs even if sanctions remain in place indefinitely, though admittedly we cannot be sure. North Koreans have talked about being willing to eat grass to keep their nuclear arsenal. Kim and his cronies will always have their caviar and cognac, but there can be little doubt that the North Korean leader would be willing to see his own people continue to suffer as long as he keeps hold of his ultimate guarantee of political and personal survival. Striving for complete North Korean denuclearization is a bridge too far.

But perhaps Kim has concluded that 20 to 60 (or 70, or 80!) bombs are enough. And perhaps he is also willing to make permanent his moratorium on testing nuclear weapons and long-range missiles, provided the United States and South Korea cap the size of their military exercises.

We can live with such a deal, too. If North Korea can be persuaded to dismantle its nuclear infrastructure, its future arsenal will be forever capped at or below its current size.

The next president would be wise not to boast too much about a deal that left one of the world’s worst dictators in possession of nuclear bombs and allowed it to resume trade and investment with other nations. But by giving North Korea a stake in peace, and a stable Northeast Asia, it would on balance probably reduce the risks of war.

Under such a deal, U.N. sanctions that have been imposed in recent years would presumably first be suspended, then lifted. It is these sanctions that really hurt North Korea because they prevent its normal economic dealings with China and South Korea in particular, as well as with Russia and some Southeast Asian nations. As a result of these sanctions, imposed largely in 2016 and 2017, North Korea’s trade appears to have shrunk by more than half despite some cheating and sanctions evasion.

But most U.S. sanctions that have been imposed on North Korea over the decades should remain in effect even after the U.N. sanctions are gone. Most American aid, trade, investment, and interaction should still be banned under such an accord. So should assistance from organizations like the World Bank, where the United States has a major influence. North Korea would not be formally recognized as a nuclear-weapons state. Any peace treaty and any U.S. diplomatic presence would be viewed as matter-of-fact mechanisms to enhance future communication, not as great accomplishments to celebrate. Only if and when North Korea gives up all its bombs, scales back its threatening conventional and chemical weapons, and starts to open up its gulag-style prisons would truly normal relations become possible with America. Only then would the U.S. sanctions be lifted. That day may not arrive for decades, admittedly. But in the meantime, we will have capped North Korea’s nuclear arsenal and ambitions and lowered the risks of war.

Michael O'Hanlon is the Senior Fellow and Director of Research of the Foreign Policy Program at The Brookings Institution. He specializes in U.S. defense strategy, the use of military force, and American national security policy.