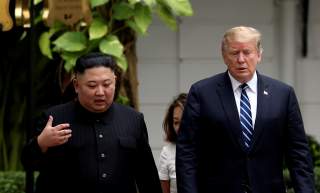 Harry argues that fresh ideas are needed to break Washington’s diplomatic deadlock with Pyongyang. He writes that both sides attempted to strike a grand peace deal in Hanoi, only for President Donald Trump to walk away despite a last-ditch offer by North Korean leader Kim Jong-un. Why did it fall apart? Were domestic politics to blame? Harry makes the case that a deal can still be had and that peace is worth it and in everyone’s interests.

Victor warns that the peace agreement and regime sought by Seoul is unclear and harmful to the U.S.-South Korean alliance. He asks what drives Seoul to pursue this with such vigor now. Why trust Pyongyang now? How much of this out of ethnic nationalism or due to the unconventionality of Trump? Victor makes the case that while peace is good, a peace declaration is not straightforward and could result in the withdrawal of American troops.