What if North Korea Fired a Missile and Nobody Cared? Coronavirus Made that Happen. 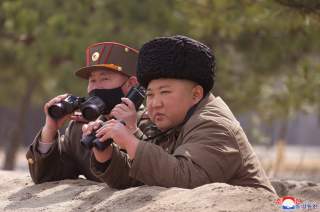 A few days ago, North Korea launched several projectiles into the waters between it and Japan. Did you know this? Unless you are a professional North Korea watcher, from that small community of journalism, government, and academia that watches Pyongyang closely, you probably did not know. And you probably did not really care either, as you are worried about more important things like dealing with the coronavirus.

I note all this to illustrate the limits of North Korean antics. Often when North Korea engages in these sorts of launches, I am asked if these are signals or otherwise efforts to communicate with the South Koreans, Americans, and Japanese. Perhaps they are, but at the most basic level they most probably reminders that North Korea is still here and still demands attention at a time when events overtake it. North Korea is basically a third world banana republic, plus a massive military. Occasionally, more serious issues like coronavirus act to remind us of that and put North Korea into a more proper, lower-ranking of our priorities.

North Korean provocations like this usually have several causes:

First, at the most basic level, the North may feel an actual empirical need to test the weapons it develops. All states do this of course, and North Korea does have a huge military budget. It develops a lot of weapons. It is on a permanent war-footing. (This likely helps explain to its people why the country’s development is so stunted.) So maybe Pyongyang really does need to put its many new weapons through their paces.

But this explanation feels thin, as the North sometimes tests and sometimes not. It often attaches outlandish rhetoric to tests and frequently schedules them at times which look an awful lot like signaling – usually displeasure at something done by South Korea. And the world is especially attentive to Pyongyang's missile launches, which are technically banned by the United Nations (not that that has ever stopped the North). So usually we assume a deeper meaning.

Second, the tests – or lack of – may signal displeasure with the rest of the world. The most obvious case for signaling now is the stalled denuclearization talks initiated by the administrations of South Korean President Moon Jae In and American President Donald Trump. Both leaders variously promised a deal or some other sort of breakthrough with the North. That has not been forthcoming. Trump particularly seems to have pulled away from the talks, content with the photographs and imagery of the meetings and disinterested in the actual substance. Trump will use the imagery for re-election purposes and is unlikely to meet Kim Jong Un again unless Kim offers more concrete concessions.

Given this, the occasional missile tests in the years since the first summit in Singapore of Trump and Kim are likely to pressure Trump to make concessions. Certainly, the Moon government is sensitive to North Korean shenanigans. Moon’s signature presidential initiative is his outreach to the North, and with South Korean legislative elections coming up next month, Moon is uniquely vulnerable to North Korean pressure.

Third, these tests serve to remind us simply that North Korea is here and cannot be ignored. As Soo Kim of the Rand Corporation said in a radio interview on the launches with me this week, it is a ‘forget-me-not’ card. North Korea, like all states, is sensitive to the perception of disdain or disinterest. Prestige is important. This is all the more central given the North’s unique political position as a direct competitor state to South Korea.

The two Koreas are legitimacy competitors. Both claim to rule the entire peninsula. Both claim to speak for the Korean people. Both claim to be a superior system offering a better outcome to the nation. Both manipulate the language of nationalism against each other. Given all this, they are existential threats to each other.

For North Korea, this competition has gone decidedly and obviously badly. Just as East Germany slowly lost a similar competition with West Germany during the Cold War, so has North Korea. Indeed, North Korea is worse than East Germany ever was. As with the East, the North could not keep its people inside its own country if it did not lock them in. By any objective measure – gross domestic product, public health, sanitation, social service provision, infrastructure, and so on  - North Korea has lost the inter-Korean race. In the German case, this was fatal to the East. When Eastern citizens were finally allowed to vote, they decisively voted for unification on Western-terms. Less than a year later, East Germany was gone.

North Korea vigorously resists this fate. It may be the failed totalitarian appendage of the real Korea, but it will never admit this. It will insist on its claim to be an equal Korean state enjoying a parallel legitimacy. Nuclear weapons back up this claim. North Korea as a nuclear weapons state bolsters its claim to be the real Korea, or at least a parallel, also legitimate Korean state which does not deserve to be absorbed.

But nukes are extreme. A more practical way to remind us all that North Korea is here and cannot just be written off as the failed Korea is drawing attention to itself regularly. The endless missile tests and other provocations serve this purpose. They are tantrums, demands from the scary uncle in the attic that we pay attention to it so that it not be forgotten as a cul-de-sac of Korean history.

And here then, is the clarifying moment of corona in Korean geopolitics: for once, we do not care. For once, we just do not have the time or attention to lavish on Pyongyang’s latest attention-seeking outburst. What a relief.