What Putin Wants with North Korea 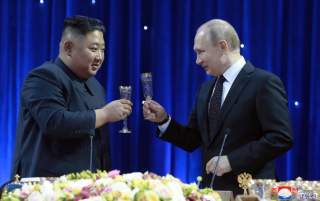 The Trump administration continues to pay a high price for treating Russia as an enemy. Vladimir Putin has dealt himself back into the Korea game. He could be helpful if it was worth his while. But as long as Washington undermines Moscow’s interests, Putin will toss some cogs into the proverbial wheel.

The collapse of the Soviet Union for a time turned Moscow into a geopolitical irrelevancy. Nowhere was that more obvious than in North Korea. The new Russian Federation recognized South Korea, earning a cascade of insults and fulminations from the Democratic People’s Republic of Korea. Pyongyang’s protestations bothered the Yeltsin government not at all since the South offered better economic opportunities.

Since then Putin has returned Russia to the DPRK, though cautiously and modestly, to be sure. Last week he met North Korean Supreme Leader Kim Jong-un in Vladivostok.

It was a low-key affair held on a university campus with no statement issued, very different from last year’s dramatic meeting between Kim and Donald Trump in Singapore. The North Korean leader called Vladivostok a “very meaningful one-on-one exchange of opinions on issues of mutual interest and current issues,” as if the two strongmen were buddies who grabbed a drink and talked sports. But Kim’s latest diplomatic venture gave Russia at least a toehold in the peninsula’s future.

The Soviet Union loomed large in Korean affairs following World War II. Moscow and Washington divided the peninsula into two occupation zones, which became separate states. The Soviets anointed Kim Il-sung, an anti-Japanese guerrilla commander, to lead the new North Korea. In 1950, Moscow also approved Kim’s plans to invade the Republic of Korea, sparking the Korean War. But Joseph Stalin avoided obvious direct involvement, leaving it to the People’s Republic of China to save the DPRK following America’s entry into the war.

With destalinization after Stalin’s death, Kim’s relations with Moscow deteriorated and Pyongyang was in the process of creating an even more suffocating personality cult. Although the North’s relations with China also oscillated, the latter retained a greater historical, cultural, and economic stake in its small neighbor. For instance, when Beijing followed Russia in recognizing Seoul, the DPRK had a much more measured reaction. Pyongyang couldn’t afford to lose its only remaining significant ally.

Little changed for Moscow over the last three decades, and Russia’s attention was firmly focused on the West, and the expansion of the North Atlantic Treaty Organization, military intervention in the Balkans, and aid to Georgia and Ukraine. But the Putin government has begun reasserting itself elsewhere—in Syria most obviously, though also in Venezuela and now North Korea. Furthermore, Moscow has done this overwhelmingly to Washington’s detriment.

Russia’s return to the DPRK, rather like the rushed dispatch of a couple planes of personnel and materiel to Venezuela’s Maduro government, is a response to America rather than defense of serious—let alone vital—national interests. Moscow worries about U.S. troops near its populated west, not its isolated east. Russia has little surplus capital to invest in the a grand economic prize of Siberia and lacks the population of ethnic Koreans which links China to North Korea.

However, Washington’s apparent determination to hobble its own negotiating position—demanding that a survivor like Kim Jong-un render himself defenseless and hope for the best—gives Putin an opening. Putin sang his version of We are the World: “We need to restore the power of international law, to return to a state where international law, not the law of the strongest, determines the situation in the world.” While this is hypocritical cant, it may attract some surprising followers as Washington attempts to coerce the entire globe to follow its policies in Iran, Cuba, and elsewhere.

Indeed, Putin brought the point home to the peninsula, recognizing the perverse incentives created by America’s attacks on vulnerable countries Washington doesn’t like—especially Libya, which negotiated away its missile and nuclear programs. Putin contended that if international law is restored, “this would be the first and critical step toward resolving challenging situations such as the one on the Korean Peninsula.”

Moreover, Putin called for restarting the so-called Six-Party talks, including Japan and Russia, alongside America, the Republic of Korea, and China with North Korea. That makes little sense, however, since Pyongyang’s objective even then was to engage in direct talks with America, which it correctly perceived as its most important foe. Kim now has a direct line to Beijing, Seoul, Moscow, and, most importantly, America. As for Japan, there appears to be interest even there in arranging a summit with Kim.

In any case, National Security Adviser John Bolton rejected the idea. But Bolton was forced to address Putin, despite the harshly anti-Russian policy Washington has implemented. Besides, Bolton’s rejection looks hollow as bilateral talks remain stalled.

More significantly, Putin endorsed Kim’s call for a step-by-step negotiated settlement backed by U.S. security guarantees. Argued the Russian leader: “it will eventually be possible to achieve [denuclearization] if we move forward gradually and if we respect each other’s interests.” Which happens to be true, assuming Kim is prepared to denuclearize.

There remains obvious reason to doubt Kim’s and the regime’s willingness to abandon weapons in which so much has been invested, and which offer the only secure deterrence to American military action. Indeed, other than President Trump, South Korea’s President Moon Jae-in, and a few left-wing activists in the ROK, no one believes Kim is ready and willing to do so. However, if you grant Kim’s theoretical willingness to yield his entire arsenal, last year he set his conditions. The Singapore summit statement committed both parties to improve the bilateral relationship and create a more peaceful regional atmosphere to start (in Pyongyang’s view). In truth, they seem reasonable requirements for disarming.

Apparently, the two sides agreed before the Hanoi meeting to set up liaison offices and declare the war over, but these proposals died when President Trump walked out. These would have been modest steps, to be sure, but would have addressed Kim’s concerns while justifying a U.S. push for the North to move on denuclearization. The failure to do so, suggesting the outsize influence of Bolton, who last year called for military action against the North, can hardly make the denizens of Pyongyang feel secure.

Although the president’s advisers, who seem to be running the Korean show, are not inclined to listen to the Russian president, his position backs up South Korean President Moon Jae-in. China also has always taken a pragmatic view of the Korean question. President Trump is looking ever more isolated.

Perhaps Putin’s most subversive point was to sneer at South Korean acquiescence to American dominance. He cited Russian proposals for trans-Korean projects which Seoul rejected under pressure from Washington. That, he said, reflected a “deficit of sovereignty.” Putin might win some fans today among ROK policymakers worried that U.S. intransigence—reflecting the fantasy that Kim can be forced to trust the Trump administration with his future—will destroy a unique opportunity to secure a stable and peaceful peninsula.

The most interesting question surrounding the summit will not be answered until later. Did Moscow make any private promises to support the North, most importantly to help ease the impact of U.S. sanctions? The gains to Pyongyang from such a deal are obvious: keeping even a small windpipe open would ensure the functioning of the North Korean system. A Russian commitment also would put pressure on the Xi government be more supportive of Pyongyang against Washington, lest Beijing lose diplomatic ground achieved in the four summits over the last year.

For Russia the economic benefits of aiding the North are minimal. The DPRK market is small and difficult to manage even in the best of times, and any public activities would trigger additional U.S. sanctions against Moscow. Still, helping the North resist Washington’s demands would hamper the Trump administration’s attempt to reshape Northeast Asia to its advantage. Additionally, there would be diplomatic gains from providing North Korea with another friend to maintain Pyongyang’s healthy independence from China and South Korea.

Kim continues to demonstrate an adept diplomatic hand. After meeting with Putin, only a summit with Shinzo Abe obviously remains left. The Putin-Kim soiree isn’t likely to yield much publicly anyway, but it may have won the DPRK a bit more covert backing which could strengthen its hand against Washington. If so, that will add to the price paid by America as its relations with the Russian Federation turn into a seemingly permanent mini-Cold War.