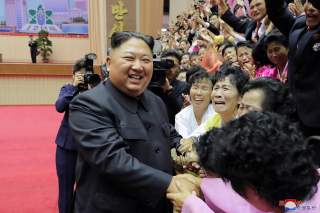 With every day that ticks off the calendar, the Trump administration is that much closer to North Korean leader Kim Jong-un’s ominous end-of-year deadline. North Korean officials and spokespeople are making increasingly strident statements about Washington‘s negotiating position and approach, all of which suggest that Kim is indeed serious when he told the world earlier this year that he was running out of patience. Back in Washington, the White House resembles a headless chicken with no direction, running around every which way, too consumed with the impeachment battle dominating every waking moment of their lives to care very much about salvaging Trump’s signature foreign policy initiative.

In the weeks since working-level talks in Stockholm, Sweden broke down after a single day, Pyongyang has been registering its contempt in the typical North Korean way: with fire and flare. This week has been no exception. On November 13, the spokesman of the State Affairs Commission delivered a not-so-subtle hint that the North is very close to breaking its self-imposed moratorium on nuclear and ICBM tests. In the words of the spokesman, “At present when one party backpedals on its commitments and unilaterally takes hostile steps, there is neither reason nor any excuse for the other party to keep itself bound to its commitments.”  One day later, chief North Korean negotiator Kim Myong Gil released his own set of comments, where he again expressed sincere doubts about whether Washington is truly committed to finding a way forward.

If there is any urgency in the Trump administration, they aren’t showing it. Stephen Biegun, Trump’s point man on the North Korea file, is doing the best he possibly can with the resources and leverage he has at his disposal. He holds a thankless job with a near-impossible mandate: persuading North Korea to denuclearize despite having spent decades of time, tens of billions of dollars, and a whole lot of opportunity cost to assemble as many as 60 warheads. On top of that, Biegun has been given very little rope to work with. A negotiator like Biegun can only do so much if the people at the top are unwilling to modify their negotiating position, climb down from their exorbitant demands, and have the courage to see the North Korean nuclear problem for what it is: the product of a regime surrounded by much more powerful neighbors, with no real allies, living in perpetual paranoia of being overrun by foreign forces.

There is a reason, after all, why four previous presidents left office without having solved the problem. Poor negotiating tactics and fantasy objectives are only part of the story. The far bigger piece of the puzzle is the naive assumption prevailing throughout the edifice of Washington’s policy community that the North Korea nuclear problem can actually be solved. It can’t. And it’s about time U.S. officials stop pushing on a locked door. The sooner they do, the faster they can save what little gas they have left in the tank for a policy that actually has a chance of succeeding.

What would such a policy look like? To admit the obvious, it would be a wholesale change from what the foreign policy elite is used to.

Denuclearization, an obsession of Washington’s for over three decades, would no longer be at the front-and-center of the table pushing every other agenda item to the side.

Regular channels of communication between Washington and Pyongyang and the exchange of diplomats to one another’s capitals would no longer be viewed as a premature reward to one of the most brutal regimes on the planet and rather a necessary element of statecraft (newsflash: in order for diplomacy to work, diplomats need to talk).

Transforming inter-Korean relations from a hot-and-cold affair depending on who happens to be sitting in Seoul at any given time into a stable bilateral relationship with clear and permanent channels of communication would no longer be viewed as something to be leveraged, but instead, be treated as a U.S. objective in and of itself. Far from blocking economic initiatives that would contribute to a warming of relations between the Koreas, Washington would step out of the way and allow the South Korean government to take greater control over its own policy towards the North.

The nuclear issue would also be tackled more incrementally by U.S. policymakers. Impatiently bombarding the North Koreans with incessant and maximalist demands ever more detached from reality—the most prominent being former national security adviser John Bolton’s Libya-like vanity project—only forces U.S. diplomats to climb more mountains during the course of their negotiations and reconfirms a feeling in Pyongyang (already widespread) that the United States is not interested in normalization at all. Denuclearization would be treated as the very long-term project it really is, one requiring both parties to adopt a framework that sees the value in Incrementalism and verified step-by-step concessions.

Will any of these changes actually occur? If you like to place bets, it would be smart to wager on continued gridlock. The Beltway has an unhealthy habit of protecting the status-quo ante as if it were one of its own children. After all, change is hard; the path of least resistance is more politically convenient.

As it pertains to North Korea, however, taking the familiar path has resulted in U.S. policy failure. And neither is it making a nuclear North Korea any easier to manage.

If President Trump doesn’t want to ring in the New Year with the first North Korean ICBM launch in over two years, then it would behoove him to look in the mirror and ask himself what his administration can do to prevent dialogue from crumbling.