Who Is Chang Song-min, the Man Behind the Kim Jong-un Death Rumors? 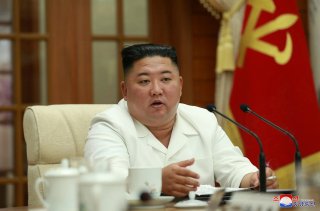 Chang Song-min is an eccentric former political aide of Kim Dae-jung and a North Korea hawk. At one point, he was President Kim’s political secretary, and he was elected to the National Assembly at age 39. But what looked like a bright career ahead of him ran into a pothole in 2002 when he was removed from the Assembly for violating election law. One of his campaign managers was convicted of paying sums of money to election officials.

He tried to run again in the same district but only won 11 percent of the vote. Since then, he has mostly stayed out of direct participation in electoral politics, but he has written a few books about policy, taken positions with issue groups, and hosted a TV show, which was reprimanded by authorities for spreading slanderous false claims.

In 2013, his television show, “Chang Sŏng-min’s Issue Tank,” which was broadcast on TV Chosun, hosted a North Korean refugee who falsely claimed that the 1980 Gwangju Uprising, a key moment in the democratization of South Korea, had been infiltrated by units of the North Korean military.

The Gwangju Uprising is still a touchy issue in Korea forty years later. Students, laborers and citizens of the metropolitan city, the largest in the Honam/Jeolla region, rose up and formed a citizens’ militia to take control of the city after military police fired on and killed locals near Gwangju Station. After the first wave of soldiers, who had been sent in to enforce nationwide martial law, retreated, more troops came in on May 27 to retake control of the city, killing hundreds. For years, the events of Gwangju were covered up by the authoritarian Chun Doo-hwan government and Chun’s democratically-elected successor, but the spirit of Gwangju yet motivated the activists who kept fighting to win democracy in 1987.

While the Korean government today officially recognizes Gwangju as a key event in its history progressing towards democracy, there still exists a split in how liberals and hardcore conservatives view it. Many of the students and activists involved in the broader Korean democracy movement and especially in Gwangju, a progressive city, indeed held left-wing views and some even professed sympathy or support for socialism. However, the conspiracy theory that North Korea was itself directly involved, which sometimes is raised by right-wing commentators, cannot be substantiated by anything.

Hence, after the broadcast ran, the liberal-leaning party, the Democratic Party, requested the communications bureau to investigate. The Korea Communications Commission (KCC) ruled that the program had violated laws regarding fairness and standards and a majority of members voted to issue a legally-binding warning.

Chang denied that the views expressed by the North Korean refugees represented his views, but nonetheless, when he tried to run for president in 2017, the People’s Party refused to let him join over the 2013 controversy. (In addition to being a progressive party at the time, the People’s Party was based in the Jeolla region, where the uprising took place.) Instead he formed his own party and won 0.01 percent of the vote.

Over his years as host, Chang was frequently criticized for being biased and sensationalistic, and “Issue Tank” had been investigated by the KCC multiple times. In 2015, the commission issued a “caution,” one degree below a “warning,” following his emphasizing speculation about members of the opposition party being involved in a scandal. And in 2016, he accused the Democratic Party of being aligned with North Korea.

He appears to have developed a hawkish position on North Korea over time, as the conservative side is more likely to accuse the Democrats of being “pro-North Korea” when they advocate for detente-style policies. That would be a break with the president he served, Kim Dae-jung, who met with North Korean leader Kim Jong-il and promoted the Sunshine Policy.

Chang remained a member of the various iterations of the Democratic Party up until the 2017 election, but he is now an independent and a critic of Moon. He compared “Moon’s civilian dictatorship” to that which perpetrated the massacre in Gwangju, and, on National Liberation Day, he wrote the Korean people needed to be liberated from Moon.

On his Facebook page, he shares such rumors about the health status of Kim Jong-un and his views on news and politics. The Kim Jong-un rumors are the same ones he shared in April, which have now been widely seen as discredited by all credible sources. Chang, however, argued that the photographs of Kim Jong-un appeared fake. North Korea released new photographs this time around, too, which no doubt will be judged as fake by anyone who wants to keep the coma rumors going.

Why do we rely on such sketchy sources for insights into what may or may not be happening in North Korea? Chang Song-min is just one of many people whose speculations about the hermit kingdom are rehashed by media outlets around the world, Korean, American, Japanese and Chinese. There are a number of Japanese tabloids that churn out startling claims from anonymous sources and countless unnamed Chinese who act as sources for enterprising reporters.

Of course, there is the eternal need for media to capture eyeballs. But it is also true that when it comes to North Korea, analysts kind of have to rely to some degree on unconfirmed sources and rumors. There’s not much else to rely on. Scholars look at Rodong Sinmun, North Korea’s official party-run newspaper, to see where Kim was reported as visiting lately and try to sift out meaning.

When North Korean leadership reports that there have been zero coronavirus cases in its perfect country and that it doesn’t need outside assistance, it’s no wonder that rumors proliferate. Lack of trustworthy information in a crisis situation could be deadly.