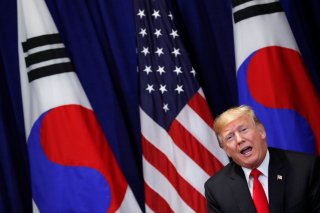 I do not believe that there will be a general peace treaty involving the United States and the Koreas by 2025. A Biden administration would probably be traditionalist and cautious on the matter, meaning that it would not agree to such a formal peace until nuclear matters are successfully addressed, and that seems a long shot by 2025. Even an interim deal that relaxed some sanctions in exchange for verifiably dismantling North Korea’s nuclear production infrastructure, while letting Pyongyang keep its existing arsenal for the time being, would be tough to achieve, though it would be a good idea. President Trump is harder to predict, but my former support for his nontraditional diplomacy with Kim Jong-un has evaporated given his inability to stay focused on the issue or develop a realistic negotiating strategy.

However, posing the question of peace raises a follow-on question. If and when we could get such a treaty, along with some semblance of a nuclear accord and perhaps even some de-escalation of the conventional military standoff, should the United States and South Korea keep their alliance? Moreover, should they keep the presence of American military forces on the Korean Peninsula? President Trump has seemed willing to end the alliance at times. If we could get the aforementioned deal, would that outcome make sense?

As much as Dean Acheson’s 1950 comments about Korea not being important to America came back to haunt the United States, it is still a fair question in the abstract as to whether a distant superpower should want to ally formally with a small and exposed peninsula attached to the giant Eurasian land mass—attached via China and Russia, no less. Is it worth it? Is it prudent? On balance, I think the case is strong for keeping the alliance, from an American perspective, provided that South Koreans agree. That said, if South Koreans (or all Koreans, in the case of a reunified country) do not agree, then the United States can accept that outcome too given that, geographically speaking, Korea is a small, faraway, and difficult to defend place.

With the planet’s eleventh largest economy, though, South Korea is quite important in today’s world. Alliances with such important powers are generally worth preserving for the simple reason that the United States should not want to go back to the kind of anarchy that prevailed in Europe, as well as East Asia, a century ago, when major powers often had weak and shifting relationships with each other but no real enduring bonds. The result of that, of course, was two world wars as well as conflict in Korea. South Korea is not just a large economy either, but it moreover punches far above its weight in a number of critical industries: it is among the world’s top three producers of ships, of semiconductors, and of numerous types of advanced electronics. It is also the second most powerful country in the Indo-Pacific region after Japan, with which the United States also has a security alliance. The American and Korean publics seem to understand and agree with these observations as well. Both peoples see the other in a favorable light and support the alliance.

Given the dynamism in the Asia-Pacific region which gave rise to President Obama’s rebalance or pivot, which has been maintained in a number of ways by the Trump administration, Korea’s role in America’s global system of alliances takes on an even more important light. In concrete regional terms, the U.S.-ROK alliance is crucial to American posture in the broader Indo-Pacific. While American allies are plentiful around the world, they are most numerous in Europe and, in different ways, both Latin America and the Middle East. However, they are far more scarce in Asia. In specific military terms, the U.S.-ROK alliance has proven its mettle not only on the Korean Peninsula but from Vietnam to the Middle East and beyond. The United States has some 60 allies and security partners, but, of those, arguably only Great Britain, Australia, and perhaps Canada and France have shown the same commitment to collaborative global military operations with the United States, combined with the same mass and fighting capability, as South Korea has demonstrated.

Indeed, although it is streamlining the size of its armed forces at present, South Korea today has the largest military of any American ally. It probably has one of the three or four toughest and most combat-ready armed forces in the world. It ranks fifth in military spending among formal U.S. allies (sixth if one counts Saudi Arabia), and leaving aside U.S. security partners in the broader Middle East, none of which are formal allies, South Korea is also at the top of the list for burden-sharing among American allies. It devotes some 2.5% of GDP to its military—the most of any U.S. ally in East Asia, Europe, or the Americas with the exception of Colombia (and Trinidad and Tobago)—well in excess of NATO’s 2% goal or actual average of 1.5%. For future security missions ranging from counterterrorism to protection of sea lanes to cyber defense, the alliance offers great benefits for the United States.

Regardless of one’s views on whether a long-term U.S.-ROK alliance makes sense, however, it is important to think through the issue before that alliance becomes a chip in a negotiating process with Pyongyang. The alliance is far too central to U.S. security to be handled in such a way.

Michael O’Hanlon is a Senior Fellow and Director of Research in Foreign Policy at the Brookings Institution, author of A Skeptic’s Case for Nuclear Disarmament, and author of the upcoming book The Art of War in an Age of Peace: A U.S. Grand Strategy of Resolute Restraint.