Why Ending the Korean War Won't Be Easy 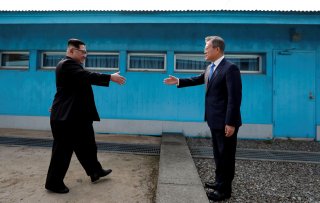 We need to keep in mind that ending the Korean War is not just a matter of signing a peace treaty: the Korean War, its aftermath, this division of the Korean Peninsula which has persisted for so long, has left a legacy of problems which have plagued the peoples of the two Koreas for the past seventy years. The people of North Korea have been living under a patrimonial, anachronistic, and totalitarian regime which believes that its survival kit consists of nuclear weapons and ballistic missiles. In this vein, the so-called North Korean question includes not just a nuclear missile problem but also conventional military threats, human rights violations, a humanitarian crisis, and the abnormal diplomatic relationships with the United States and Japan due to lack of normalization.

In this context, the foundation for ending the Korea War should be peace regime-building on the Korean Peninsula rather than a legalistic approach of replacing the armistice agreement with the peace treaty. Peace regime-building would create a turning point for resolving the North Korean question, spreading the market and blowing the winds of change within North Korea. The only way to do this, however, is to make the Kim dynasty give up its nuclear weapons, which would then in turn pave the way for ending the Korean War in such a comprehensive way as to include the legal termination of the war.

If the Kim dynasty continues to resist the serious demands for denuclearization from the international community, it will face total isolation compounded by United Nations Security Council sanctions resolutions and the coronavirus pandemic. It seems the North is facing a very difficult economic situation, exacerbated by the sealing of its China border, through which many of the basic goods for jangmadang (informal small markets) were brought in. Chairman Kim Jong-un will have to choose between either regime collapse or denuclearization, that is unless President Donald Trump’s hand moves to lift sanctions off the North.

If Kim chooses denuclearization, the Korean Peninsula will see the establishment of a peace regime entailing the end of the Korean War before its seventy-fifth anniversary in 2025. Otherwise, North Korea will have to run the risk of regime collapse within just a couple of years, and South Korea will have to discover the opportunity for reunification which lies in absorption of what results. Of course, reunification is not guaranteed: it will depend on whether the South Korean government recognizes the immense cost of Korean division, and it will depend on how well it prepares for dealing with the North Korean contingency, both internally as well as externally.