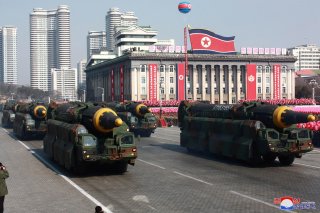 On January 7, 2020, Iran launched ballistic missiles at American bases located in Iraq. One set of the missiles launched were in the “Qiam” series, missiles based on the North Korean built (and proliferated to Iran) Scud C system—and likely enhanced with North Korean assistance as well. But this is only the latest example of North Korea’s deep involvement and support of Iran’s ballistic-missile programs, an activity that has been ongoing since the 1980s, wrongly assessed by some poorly informed analysts to have “declined” following the 1990s, and a very real threat that continues with the likely presence of North Korean advisors and technicians in Iran today. But the threat is probably more compelling than most analysts realize.

North Korea has either developed or assisted with the development of the majority of Iranian liquid-fueled ballistic missiles systems. In fact, the majority of Iran’s ballistic missile systems can trace their genesis back to North Korean proliferation and/or technical assistance. Some key examples include several Scud systems, the No Dong series, the Musudan series (now seen in the Khorramshahr), the “Safir” satellite launch vehicle (the first stage is a No Dong), and Unha technology—now seen in the Iranian “Simorgh.” The first stage of the Unha rocket is a cluster of four No Dong engines—which is also the first stage of the “Simorgh.” Iranian technicians were reportedly present at both the 2009 and 2012 “Unha” launches. In short, as the North Korean ballistic-missile programs advance their capabilities, these new developments are often then proliferated to Iran. But there is more, and this now involves both IRBM and ICBM advances in North Korea (and of course a new rocket).

According to press reports in 2013, the North Koreans were developing and assisting the Iranians with the development of an eighty-ton rocket booster—presumably for an ICBM.

In 2015, further developments were revealed in the press, when it was disclosed that several shipments of the aforementioned rocket from North Korea to Iran had occurred even as JCPOA talks were ongoing. In 2016, following the conclusion of the JCPOA talks, the U.S. Treasury Department imposed sanctions on Iranian companies and individuals for violations of sanctions imposed on North Korea. To put a finer point on it, North Korean and Iranian officials had visited both nations. This was done so that Iran could procure an eighty-ton rocket booster for a missile that North Korea was developing at the time. The names and companies (including front companies) involved are in the actual Treasury Department document.

In 2017, North Korea tested what they called the “Hwasong-12.” This missile is an IRBM with a range of forty-five hundred kilometers (or more). It turns out, the Hwasong-12 is powered by a rocket engine reportedly procured from the Ukrainians (according to the Ukrainians, illegally, under the table, and unknown to officials, or not at all), known as the RD-250. This engine is reportedly powered by eighty tons of thrust at sea level, thus likely making it the system that was known (for several years) as the “eighty-ton rocket booster” that North Korea collaborated on and proliferated to Iran. Later in 2017, North Korea tested two ICBM’s. The first, the “Hwasong-14” is assessed to be capable of hitting Anchorage in Alaska, while the second, the “Hwasong-15,” is assessed by many analysts to be capable of hitting the east coast of the United States. Both ICBM’s use the “Hwasong-12” as their first stage, powered by the RD-250 engine with eighty tons of thrust.

What does this mean? It appears that it means North Korea collaborated on and then proliferated a system to Iran that was then tested in 2017—first as an IRBM and then (using the rocket from the first test as the first stage of an ICBM) as two separate ICBM systems. If this is the case—and it appears that it is—this means that North Korea has proliferated an IRBM (based on the RD-250 engine) to Iran, and if they have also proliferated the associated technology from the Hwasong-14/15, they have now given Iran both an advanced IRBM capability and an ICBM capability. It also means that when it comes to ballistic missile technology, North Korea has now proliferated Scud, No Dong, Musudan, Unha, and Hwasong 12/14/15 technology to Iran—updating Iran’s missile capabilities as they update their own. We can probably expect to see tests of this system and perhaps associated systems in Iran within the next two to five years. Let there be no doubt, if you see it in North Korea today, you will see it in Iran tomorrow.