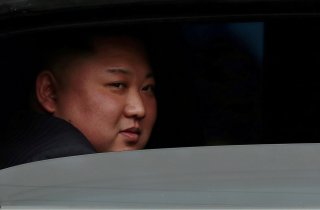 North Korea, last month, launched its first ballistic missile test in a year, in what was seen as an effort by the Kim regime to test the new Biden administration.

Now, a new government report says the North Koreans may be planning a different kind of test.

According to the Annual Threat Assessment, released this week by the Office of the Director of National Intelligence, North Korea may soon be ready to resume long-range missile or nuclear testing this year.

Per the Yonhap News Agency, North Korea’s last nuclear test took place in September of 2017, with the regime observing a “self-imposed moratorium on long-range missile testing” since November of that year.

Under a section titled “North Korean Provocative Actions,” the intelligence community assesses that Kim Jong-un “may take a number of aggressive and potentially destabilizing actions to reshape the regional security environment and drive wedges between the United States and its allies.”

North Korea has, however, left the door open to future denuclearization talks with the United States, following the diplomatic opening that took place during the Trump presidency.

“We assess that Kim views nuclear weapons as the ultimate deterrent against foreign intervention and believes that over time he will gain international acceptance and respect as a nuclear power,” the report said. “He probably does not view the current level of pressure on his regime as enough to require a fundamental change in its approach.”

The report goes on to state that the Kim regime is pursuing “prestige, security, and acceptance as a nuclear power through conventional military modernization efforts,” through both nuclear weapons attainment, as well as evading of sanctions and cyber capabilities.

The ODNI also said that it sees North Korea as “a WMD threat for the foreseeable future.” Indeed, a report earlier this week stated that North Korea could have nearly 250 nuclear weapons by 2027.

“Iran will remain a regional menace with broader malign influence activities, and North Korea will be a disruptive player on the regional and world stages,” the report’s introduction says. “Major adversaries and competitors are enhancing and exercising their military, cyber, and other capabilities, raising the risks to US and allied forces, weakening our conventional deterrence, and worsening the longstanding threat from weapons of mass destruction.”