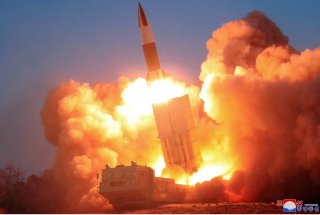 The Korean War could come to an end formally, legally, with a peace treaty which would replace the seventy-year-old armistice, or it could end, for all practical purposes, with the end to hostile relations between North and South Korea (ROK) and between North Korea (DPRK) and the United States, with no party having any real concern that war would break out again. It could end one way and not the other, or it could end both de facto and de jure, but I do not think it will end in any sense within the next five years. Indeed, in practical terms, what has passed for peace for decades could be replaced by war at any time.

Why the pessimism? There are, after all, indicators of stability in Northeast Asia, with arguably more status quo than revolutionary forces at work. The ROK is a prosperous and successful democracy. The DPRK remains a poor, undeveloped country ruled by a totalitarian regime, but its people have proven to be resilient and the Kim dynasty stable. The Soviet empire has disappeared, and China has risen to economic dominance while enjoying political stability. And America remains a Pacific power, actively cultivating its alliances with Seoul and Tokyo. So why does a second Korean War seem as likely a development as an end to the first one? What is the source of instability and why is there fear of surprise attack in Seoul, Pyongyang, and Washington?

At root, of course, is the division of the Korean people. The history of how this came about is as well-known as is the North’s attempt to accomplish reunification by conquest. The result has been a durable commitment in both North and South to ultimate reunification, but their political and economic systems are so vastly different from each other that peaceful, negotiated reunification seems to be more national myth than a realistic near-term prospect. The standing armies of both countries are evidence of real concern about national defense and, as each fears, about potential aggressive intent by the other.

Interwoven with the history and military capabilities maintained by North and South is the geostrategic landscape reflected for decades in the U.S.-Soviet global competition, and more recently in Sino-U.S. competition in the Asia-Pacific region. Neither China nor the U.S. seeks conflict on the Korean Peninsula, but neither does either wish to see their ally overwhelmed. The U.S. may not be pursuing a containment strategy towards China, but it is intent on not being pushed out of the region. And China has demonstrated that it will fight to avoid losing a buffer state on its border. Change will have to be carefully managed to take account of more interests than just those of the North and South.

The principal source of current tension is the North’s pursuit of nuclear weapons and the ability to target both the United States and its regional allies. The North has claimed that nuclear weapons are necessary to deter the U.S. from attempting regime change. From Washington’s perspective, North Korean nuclear weapons pose a unique threat. Kim may not be reliably deterred even from suicidal use, and mere possession by the North may prompt America’s allies to question its extended deterrence and undercut the international nonproliferation regime.

Over the last thirty years, successive American administrations have thought that peace would require the U.S. to normalize economic and political relations with the DPRK in order to address the North’s fear of regime change and thus permit it to abandon its nuclear weapons. But if normalization is ever to be credible, it would have to follow a change in the North’s human rights policy—the way it treats its own people—as well as denuclearization. The rapprochement between North and South could plausibly and naturally follow. We have learned a lot about how to do all this, as well as how not to.

Robert Gallucci is a Professor at Georgetown University and former Dean of its Edmund A. Walsh School of Foreign Service. He previously served as President of the MacArthur Foundation, as U.S. Assistant Secretary of State for Political-Military Affairs, and as Ambassador at Large for the United States, in which capacity he led the U.S. negotiation efforts with North Korea which resulted in the 1994 Agreed Framework.