Why The Korean War Was Never Formally Ended 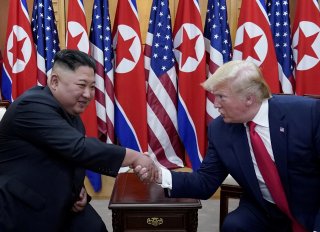 Despite pessimism and brinkmanship in Washington and Pyongyang, the Korean War—the United States’ longest-running war—will officially end by 2025. With the war, which was merely paused by the armistice agreement of July 1953, having reached its 70th anniversary, it’s important to reflect on what it will take to conclude it and to work toward lasting peace. While there are many roadblocks, the most important is the lack of political will in the United States and the international community.

The key to building this political will is changing the Washington foreign policy establishment’s perception of associated political and security costs. The idea that ending the war is a “gift” to North Korea or an insult to our South Korean allies is false. Ending the war is a common-sense, low-stakes step supported by South Korea. It does not, as some contend, mean the immediate withdrawal of U.S. forces from South Korea or undermine the ability of the United States to defend itself or its regional allies. It would, however, provide a crucial security guarantee to North Korea and uphold part of the Singapore Summit joint statement.

While ending the conflict may not have the immediate effect of North Korea’s unilateral denuclearization—the unattainable fever dream of many in Washington foreign policy circles—it would help create the environment to address the security concerns that justify the development and existence of North Korea’s nuclear arsenal, as well as its totalitarian system of government. Seventy years of “strategic patience,” bombastic rhetoric, and military brinkmanship have done little to ensure the well-being of people on the Korean Peninsula. Recognizing these failures and recent developments should pave the way for a new approach in the next five years.

For what may be the first time, members of Congress have begun to understand the linkages between building peace and addressing the United States’ concerns with a nuclear-armed North Korea. People in the United States support diplomacy with North Korea. Furthermore, South Korea has a progressive president who was elected with a popular mandate to seek inter-Korean reconciliation, and whose party won sweeping majorities in the latest election. This is likely to only further President Moon Jae-in’s willingness to seek peace.

While recent North-South tension might seem like an irreversible breakdown, it is more likely the North’s attempt to break the stalemate with the United States. In which case, it provides a critical opportunity to renew diplomatic entreaties and offer steps, including limited sanctions relief and an end-of-war declaration, to jump-start de-escalation and progress.

Perhaps what provides the clearest evidence that the war will end by 2025 is the growing transnational solidarity movement of peace advocates, such as Women Cross DMZ and Peace Action, in the United States and South Korea. This movement has begun socializing the idea that prioritizing peace is an essential component of achieving the United States’ stated national security goals in Korea. The coordinated grassroots organizing that has taken hold across borders since the Trump-Kim diplomatic opening has grown from a vision of shared security and well-being that rejects militarism as the primary tool of safety.

The coronavirus crisis has further revealed what this movement recognizes: a re-envisioning of how governments, including the United States, achieve security and prosperity for everyday people is urgently needed. Ending the war with North Korea is an opportunity to reimagine U.S. engagement from one based on hostility and military threats to one based on understanding and cooperation. It is this people-powered movement helping push governments to pursue such a transition that will be essential to building safety for all and ending the Korean War by 2025.