Why the Korean War Will Likely Not Be Over by 2025 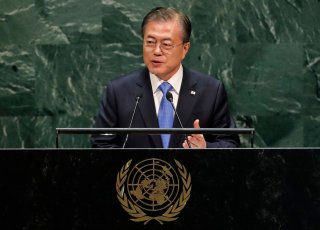 Millions died in the Korean War and the armistice that followed was no substitute for real, positive peace. However, the ongoing armistice is better than war with a nuclear North Korea. 2025 will likely not be that much different from today. A peace declaration or treaty—a real one that changes inter-Korean and U.S.-North Korean relations—would require one of three drastic shifts.

What would happen if Washington and Seoul’s disagreements over Pyongyang reached a breaking point? Imagine this coupled with stalled alliance cost negotiations, South Korea pushing inter-Korean ties despite sanctions or a unilateral American decision to withdraw U.S. forces from the peninsula. Perhaps, as North Korea’s nuclear weapons improve, Washington may want to wash its hands of the risks associated with North Korea.

The future of the American-South Korean alliance must be respectfully negotiated by both powers. Yet, under the right conditions, a change to the alliance for whatever reason could facilitate—or be a condition of—real peace. It depends on how that decoupling is done and what North Korea wants. Partial or complete American withdrawal would decrease the military pressure on Pyongyang and provide an opening for inter-Korean trade and arms reductions (assuming that Washington does not sanction Seoul). But South Korea would be rightly concerned if the U.S. alliance and nuclear umbrella were terminated. Peace would not be served if South Korea had no independent nuclear deterrent to take its place. But a non-allied nuclear Seoul could engage with North Korea without worrying about being bullied by Pyongyang.

Complete upfront denuclearization is a nonstarter for North Korea. They’ve spent decades working on nuclear weapons and now can probably threaten U.S. cities. In the face of sanctions, poverty, and their own large but outdated military, why would Pyongyang give them up? Nuclear weapons are the only way North Korea’s rulers can be sure they’ll stay in power.

Even dangling sanction relief is not enough to change their mind. It would be one thing if they were early on in their program as Iran was when the Iran Deal was concluded. But, Pyongyang already has functioning weapons and has decades of experience evading sanctions.

Washington should realize an incremental approach is the best way to roll back North Korean nuclear weapons. Even a partial reduction of Pyongyang’s missiles that could reach the U.S. mainland is a worthy victory. If Washington stopped insisting on upfront denuclearization, then progress could be made. That could eventually result in a peace declaration or treaty.

There is a possibility Pyongyang could eventually decide it wants sanction relief more than it wants to keep all of its nuclear weapons. North Korea probably still won’t end its program, but if internal conditions were bad enough, it might be willing to make a deal.

However, this is still unlikely without conditions that threaten the regime’s stability, such as during the 1990s famines. In this kind of scenario, North Korea would lash out but also be more willing to negotiate denuclearization or a peace agreement or treaty. The problem is that there is no way to be sure this would happen and any attempt to create such conditions through maximum pressure risks triggering a worse backlash or chaotic collapse instead of denuclearization.

The Kim family wants to have it all. They want limited economic and stability benefits from minor market reforms and sanction relief. They do not want the uncertainty of a real free market or a destabilizing influx of outside information as happened to the former Soviet Union. They also want the security their nuclear weapons provide but know that some of them could be given up for their economic or political goals.

Korea in 2025 will depend on the leaders of both Koreas and America between now and then. It will also be subject to the logic that drives every country: regime stability and national security. Hope that the peace is kept and improvements are made, but expect North Korea to still be difficult and nuclear-armed five years from now.