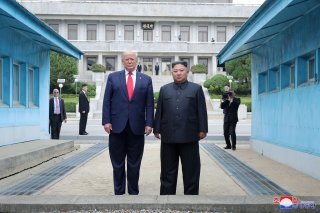 On this 70th anniversary of the Korean War, the longest war in modern history, we look back at how Korea was victimized by big power rivalry in the Korean War (1950–53) and the North Korean nuclear crisis (1993–). The victimization of Korea was structural and institutionalized. Divided Korea was readily exploited by the big powers for their politico-diplomatic, military-security, and economic-trade interests, and the two Koreas have been shouldering unbearable war-preparedness and defense expenditure for the past seven decades. The North Korean nuclear crisis in particular is fundamentally tied to the never-ended Korean War—the armistice and Cold War structure which remains on the Korean Peninsula.

First, the U.S. and China may not be ready for it before 2025 due to (a) the intensifying rivalry between themselves over the Korean Peninsula, and (b) the strong oppositions from both domestic and international status quo forces. As history indicates, big changes always accompany fierce power struggles between the status quo and revisionist or reformist and revolutionary forces at home or abroad.

Second, the two Koreas may not have risen to the task of overcoming such opposition from status quo forces by 2025. Both Koreas have common interests in ending the war and settling peace in Korea. However, they are intrinsically competitors of the divided nation in terms of calculating gains and losses when making strategic decisions.

Finally, U.S.-DPRK relations may not have developed successfully enough by 2025 as to find solutions to the Korean Problem. The establishments in the security-diplomacy arenas of the U.S. and the hardliners linked to them forcefully struck back once the Singapore summit had successfully produced a comprehensive give-and-take deal. Then at the Hanoi summit, they imposed a Libyan style denuclearization on the DPRK despite knowing the DPRK’s repeated criticisms of it as a regime change scheme.

Nonetheless, there still exist a couple of significant elements which give us hope for ending the war and settling peace on the Korean Peninsula.

First is that the DPRK needs to bring the U.S. into its strategic calculus as a counterforce to China in order to expand its room for independence in external relations by balancing the two against each other. Recall that the DPRK applied the same balancing strategy to the Soviet Union and China during the Cold War era, seeking competitive favors from both socialist powers.

Second is that the U.S. cannot avoid dealing with the growing military-security threat posed by the DPRK’s WMDs. Washington cannot ignore it when the DPRK has threatened to use nuclear-tipped missiles against the U.S. in a war targeting Guam, Hawaii, and even the contiguous United States. Moreover, the U.S. has to prevent the DPRK from proliferating WMDs.

History tells us that leaders make critical choices at critical junctures. In this context, the U.S. presidential election matters. I am afraid, however, that it may take longer for the next U.S. presidential administration to come to the negotiating table with the DPRK as a result of the deepened distrust and suspicion on both sides, particularly after the catastrophe in Hanoi.

Haksoon Paik is President of the Sejong Institute and a Member on the Board of Directors of the Kim Dae-jung Peace Center. He previously served as Vice President of the Korean Association of North Korean Studies, Chairman of the Korea Council for Reconciliation and Cooperation's Policy Committee, Executive Director of the Seoul-Washington Forum, and as an advisor in various capacities to the Ministry of Unification, the Ministry of Foreign Affairs, and the National Assembly.