Why South Korea Must Chart an Independent Path on North Korea 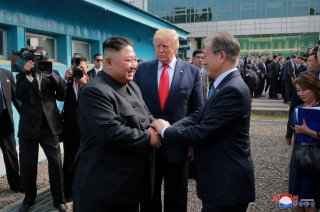 President Moon Jae-in has decided to double down on attempting to negotiate with North Korea. He shuffled four top positions dealing with the North, choosing new heads of the Ministry of Unification, Presidential Office of National Security, and National Intelligence Service, as well as a new Special Adviser for Foreign Affairs and National Security.

The incoming Minister of Unification, Lee In-young, was a student radical and long-time advocate of engagement with Pyongyang. The new national security adviser is Suh Hoon, a technocrat and North Korea specialist. The latest spymaster is Park Jie-won, successful businessman, Kim Dae-jung loyalist, Kim’s interlocutor with the North, and National Assembly member. The new adviser is Im Jong-seok, Moon’s former chief-of-staff who left under fire for his political activities.

The first three all have direct experience with the North Korea issue. Last week Lee insisted that inter-Korean dialogue must “continue without stopping under any circumstances.” As for Im, presidential spokesman Kang Min-seok observed: “We expect that he will play a big role in defending national interest and settling peace on the Korean Peninsula.”

The Sejong Institute’s Cheong Seong-Chang observed: “Tapping former lawmaker Park Jie-won as the head of NIS shows the president’s will to resume inter-Korean dialogue channel. His past experience in communicating with the North was likely considered.” The Hankyoreh newspaper reported that “Moon appears to have taken note of Park’s ongoing calls for the administration to move proactively and aggressively to improve ties with Pyongyang.”

How this extensive political and intellectual firepower will be employed is unclear. The Moon government’s recent initiatives have been routinely rebuffed by the Democratic People’s Republic of Korea. The DPRK recently made its point by (really) blowing up the Inter-Korean Liaison Office. Last week Kwon Jong-gun, the North Korean Foreign Ministry’s Director-General of U.S. Affairs, criticized Seoul for attempting to mediate between the U.S. and North, referring to the Moon administration as “the meddlesome man who had again indicated his intention to arbitrate between the DPRK and the U.S. regardless of time.”

Yet while most of Pyongyang’s angry denunciations have been aimed at the South, the actual target is the U.S. It is Washington which has imposed bilateral sanctions and orchestrated the imposition of United Nations penalties. And it is the U.S., despite President Donald Trump’s claimed desire for a deal, which prevented the Republic of Korea from moving ahead with any promised economic developments. Of course, the North blames Moon for overselling his options and refusing to buck Washington: Kim Jong-un’s sister, Kim Yo-jong, complained that Moon had accepted “the coercion of his master,” the U.S. However, even in this view the ultimate fault remains America’s.

So far the Trump administration’s “maximum pressure” campaign has failed against every target—Venezuela, Syria, and Iran as well as North Korea. Moreover, Cuba and Russia, subject to somewhat less than maximum pressure campaigns, remain unrepentant as well. Nevertheless, Washington remains wedded to failure. It even ratcheted up economic sanctions on Cuba, which continue after six decades, without having achieved any positive political end. One suspects that U.S. policymakers would make the case for maintaining the embargo even after the Second Coming, claiming that Cuban surrender to U.S. demands no doubt was imminent. So it also likely will be with North Korea.

However, Moon may be preparing to challenge Washington’s stranglehold over policy toward the North. Before being selected, Park advocated “autonomy” for the ROK, since Washington was “responsible for the strain on inter-Korean relations.” He further contended that the minister of unification should “have it out with the U.S. when there are problems with it being too excessive with its sanctions,” which these days is always.

Should Moon decide to challenge Washington he has a solid political base, his party has won a sizeable majority in the recent National Assembly elections. Moreover, the election of his successor remains two years off, giving him time to pursue new initiatives toward the North. While his chance of success looks poor, given the DPRK’s recent hostility, a decision to challenge American sanctions—perhaps play a game of geopolitical chicken with an ally of seven decades—might change the inter-Korean dynamic.

Indeed, U.S. analysts are used to South Korean subservience to American objectives, essentially the high price exacted for accepting defense by an overweening superpower like the U.S. So the latest ROK initiative has raised Washington suspicions. Last week David Maxwell of the uber-hawkish Foundation for the Defense of Democracies complained that Moon “put in place a new national security team that is composed of figures known for their close ties to North Korean officials. The composition of the team indicates that Moon plans to double down on his ‘Peace Strategy’ and will attempt to engage Pyongyang regardless of the U.S. position.”

This sign of independent thought and commitment to engagement obviously worries Maxwell, who argued that “it is imperative that such engagement does not come at the expense of sanctions. Seoul wants to force a diplomatic breakthrough at all costs; given Park’s and Lee’s histories, this could lead to a policy of rewarding the North simply for coming to the table, possibly in direct contravention of sanctions.”

Maxwell is particularly concerned that Lee desires to challenge the joint U.S.-ROK strategy working group which many in the South see as an American attempt to hinder Moon’s engagement efforts. Indeed, Lee had the temerity to observe: “North Korea sanctions are not an end in themselves.” Rather, he insisted, “the ultimate objective is peace on the Korean Peninsula.”

Maxwell’s hardline position highlights the problem of sanctions, which, contra Lee’s expressed sentiments, the administration appears to be treating as an end rather than a means. America’s ever escalating economic war against the North has failed to deliver denuclearization, just as similar attacks on other nations have failed to force political change. Now administration officials routinely declare sanctions to be a success by punishing impoverished societies such as Iran, Syria, and Venezuela, as if that was their original objective. In effect, the administration glories in creating economic hardship, seemingly for its own sake. As long as North Koreans are hungry, administration policymakers apparently feel good about their policy towards the DPRK.

Maxwell hopes that other South Korean officials, especially Foreign Minister Kang Kyung-wha and Special Representative Lee Do-hoon, can “manage” these newly appointed advocates of engagement. However, such an attitude demonstrates the bizarre incentives created when a country contracts out its security to another party with far different interests.

The ROK has an overriding interest in peace on the peninsula. South Koreans have lived with war and the possibility of renewed conflict for 70 years. In contrast, for Americans the possibility of war is more theoretical. U.S. analysts cheerfully debate the possibility of preventative military strikes on nuclear facilities as if the lives of millions of Koreans were not at stake.

Indeed, Sen. Lindsey Graham blithely dismissed the consequences of starting a nuclear war “over there,” apparently believing that the potential of a catastrophic conflagration mattered little. For him, it seems, the potential human catastrophe is just a matter of eggs and omelets, as communist sympathizers once insisted.

With a still relatively new and certainly different government in power in the North, Moon understandably wants to take advantage of every possible opportunity to end the peninsula’s unique cold war. He clearly sees peace as the end, and sanctions as only a means, one that should be discarded if it impedes achieving peace. So does his new unification minister, Lee, who insisted that “Sanctions should not be pursued for the sake of sanctions but for realizing their ultimate goal of building peace on the Korean Peninsula.”

No doubt, ROK officials might be too optimistic in their estimation of the chance of reaching a genuine accord—so far the North, which started one big war and has initiated lots of smaller provocations, has not been the easiest negotiating partner. Nevertheless, they correctly understand the counterproductive attitude in Washington. And the Korean people appear to demonstrate realism in action: nine of ten don’t believe that the North intends to denuclearize, but a plurality of 46 percent nevertheless support engagement, up from 38 percent last November.

More important, Washington has no new or useful ideas. This administration, like its predecessors, believes in more of the same. Evermore. If you just pile on enough sanctions and threaten war often enough the North Koreans will crawl to Washington and surrender. Of course, this strategy has failed for years, even decades, with the Cubans, Iranians, Venezuelans, Syrians, and Russians. Indeed, what the North accurately calls America’s “hostile policy” makes it imperative for them to build nuclear weapons. After Libya, and Muammar Khadafy’s brutal death, what rational North Korean leader would surrender the North’s nuclear arsenal?

Now also might be the right time for Moon to decide if South Korea is a truly independent nation or not. Will the ROK forever transfer responsibility for its security to another nation which believes that many other objectives have priority?

Moon should start by repealing unilateral ROK sanctions. They have limited practical effect but matter symbolically. Then he should have a heart-to-heart chat with President Donald Trump. If the U.S. won’t relax selective sanctions to empower Seoul, Moon should move ahead anyway. And dare Washington to sanction its ally which it claims to be defending.