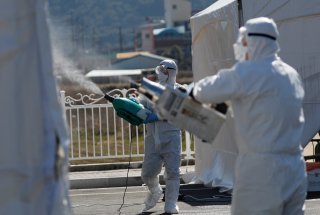 There has been woefully little progress between the United States and North Korea in the little over a year since President Donald Trump abruptly ended his third summit with Kim Jong-un in Vietnam in February 2019. Communications between the two countries have all but ceased since talks were halted after a failed round in early October of last year. The utter lack of any communications between the two states is dangerous and increases the risk of escalation and miscalculation, with very high stakes.

The COVID-19 pandemic presents the United States with an opportunity to pursue a mutual humanitarian effort with North Korea, which might also help jump-start nuclear negotiations. President Trump has already sent a letter to Kim Jong-un to this effect, but this pandemic collaboration between the two states will be more effective on working-level terms. For one thing, the President more than has his hands full with the dual public health and economic crises occurring here in the United States. This is not the time for another summit that is more photo-op than substance. Rather, this effort should be led by scientists, career diplomats, and disease experts.

North Korea has repeatedly stated publicly that there are no Coronavirus cases there, but I know from my talks with them that they are very worried. The restrictions put on North Korea by economic sanctions makes the population there even more vulnerable to the disease.  They lack basic medical supplies and their food supply chain is already quite slim. Given the shortage of masks and ventilators here at home, the United States is in no position to provide critical personal protective equipment to North Korea, but we can offer assistance in other ways.

The North Koreans are looking to collaborate on standards and procedures for how to handle their shipping containers and goods coming over the border with China, their main supplier. They need assistance in developing decontamination and mitigation guidelines. The United States could play a valuable role here, in what would need to be positioned as a mutual humanitarian effort, not as a “favor” being done by President Trump for Kim Jong-un.

The alternative, of course, is to continue the status quo of zero communications between the countries. This strategy, or lack thereof, will become increasingly dangerous if the situation in North Korea rapidly deteriorates with an outbreak of COVID-19. When the North Koreans get desperate, they strike out with attention-seeking moves like missile tests and launches. These moves are already inherently dangerous, but even more so when directed at an angry and frustrated President Trump.

I have always believed that before the North Koreans willingly come to the nuclear bargaining table, we need to engage on humanitarian grounds. These so-called soft diplomacy moves have often involved the return of U.S. soldier remains from the Korean War. Now with a pandemic that knows no borders, we have an opportunity to positively engage the North Koreans in a way that could both mitigate the spread of COVID-19 and, possibly, bring us all back to the table on other issues, such as denuclearization.

Bill Richardson, a former governor of New Mexico, served as Secretary of the U.S. Department of Energy and ambassador to the United Nations. Richardson has extensive experience negotiating with Pyongyang and has visited North Korea several times. As a diplomat and Special Envoy, he has received five Nobel Peace Prize nominations, and has successfully won the release of hostages and American servicemen in North Korea, Cuba, Iraq, Sudan, Pakistan, and Mexico.