Why U.S.-North Korea Diplomacy is Dead for This Year 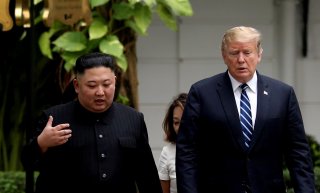 North Korean scientists continue to enlarge their stockpile of enriched uranium. Nuclear negotiations are practically dead, if not nursing a gaping wound to the neck. The talk in Washington, D.C. is less about how to resurrect some sort of diplomatic process with the North and more about what North Korean leader Kim Jong-un may have in store this October (the unveiling of a new, solid-fuelled intercontinental ballistic missile, perhaps?) and how former vice president and Democratic presidential candidate Joe Biden would address the issue if he unseated Donald Trump in November.

What we aren’t talking about in any depth whatsoever these days is when—or even if—the U.S.-North Korea talks will resume. If comments from two seasoned North Korea specialists are any indication, none of us should expect any diplomatic movement before the U.S. presidential election.

Speaking at a virtual forum on Thursday, September 3, South Korean Ambassador to the U.S. Lee Soo-Hyuck left no ambivalence in his assessment: it’s highly unlikely North Korean officials will be throwing out olive branches until it knows who the next U.S. commander in chief will be over the next four years. "I have a hunch that North Korea is waiting for the November election in the United States because we have only two months left until the election,” Lee told the virtual panel. To expect anything different would be like a gambler going all-in with a pair of threes: it may feel exciting for a short while, but you will likely end up disappointed at the result.

Gen. Vincent Brooks, the former top U.S. commander in South Korea, had the same take on events. If the North Koreans wants to engage with either Washington or Seoul, Brooks said during a different seminar, the Kim dynasty will be the sole actor making that decision. According to Brooks, “Pyongyang controls the pace of engagement. They decide when they are going to open a door and when they slam the door closed.”

There hasn’t been much door opening, to say the least. Much like 2020 has been a horrible year for everybody’s wallet (unless you’re Jeff Bezos), 2020 has been a horrible time for diplomacy of any kind on the Korean Peninsula. In fact, one could be so bold as to refer to the Year 2020 as a complete and utter waste of time. If there has been any movement on the diplomatic field, it’s gone in the exact opposite direction. Progress is nonexistent. And despite the constant pleadings from South Korean President Moon Jae-in and his new unification minister, Pyongyang has snubbed all South Korean entreaties nearly as quickly as my high school crush snubbed me after I got the courage to ask her to the prom. In 2018, North and South Korean soldiers were shaking hands and sharing smokes at the DMZ as they oversaw the demolition of guard towers on both sides of the border. Now, they are back in position, warily looking at each other with binoculars again while Kim’s sister, Kim Yo-jong, issues sternly worded statements about disgusting South Korean traitors and oversees the destruction of the joint liaison office.

North Korea is often stereotyped in the West as a country run by villainous thugs who are totally unpredictable and incapable of reason (the fact that these stereotypes don’t correspond to reality and have led the U.S. policy community to conclusions only a simpleton could love is almost regarded as a small irritant). Those in Washington, D.C. who aren’t particularly interested in diplomacy with the North and continue to delude themselves into believing it can be pressured into eliminating its nuclear deterrent have had a field day with Pyongyang’s since June. The cutting of communication lines to the South, the demolition of the liaison office, the lousy attitude of North Korean diplomats as they walk out of a conference room and make a big show about their displeasure…it all gives hardliners in the U.S. more ammunition to press their point. “See," they may say? "Why do we even bother with these people?”

For the next two months at least, U.S. officials who manage the North Korea file probably won’t have to spend time rebutting them.