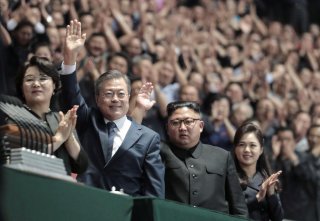 Interestingly, North Korea has insisted on signing a peace treaty with the United States since the early 1970s. Of course, it is intended to create a favorable security environment for North Korea by removing the U.S. military involvement on the Korean Peninsula. The Bush administration once considered a peace treaty with North Korea in the mid-2000s. According to Philip Zelikow, who drafted a new North Korea policy at the time, the Bush administration was seeking multiple diplomatic measures on North Korea, including “getting at the unresolved issues of the Korean war.” This means that the United States planned for the relevant parties to “move to a peace process that can try to bring a final end to the Korean War.” The 2018 inter-Korean summit specifically mentioned the end of the Korean War and the discussion of a peace regime on the Korean Peninsula. In “Panmunjeom Declaration for Peace, Prosperity and Unification of the Korean Peninsula,” two Koreas “agreed to actively pursue trilateral meetings involving the two Koreas and the United States, or quadrilateral meetings involving the two Koreas, the United States and China with a view to declaring an end to the War, turning the armistice into a peace treaty, and establishing a permanent and solid peace regime” during 2018 that marks the sixty-fifth anniversary of the armistice.

On the other hand, the declaration of the Korean War is half completed if we think from a different perspective. Among the major parties that fought in the war, the United States and China established diplomatic normalization in 1979, and South Korea and China in 1992, which means the Korean War came to an end among them. North Korea is still technically at war only the United States and South Korea. So, it may be possible that the declarations on the bilateral level may lead to the multilateral one and complete the declarations to the end of the Korean War. Of course, the declarations may be reversed and the deterioration of U.S.-China relations may make things more complicated. It is not likely that the Korean War will not come to an end even before it turns seventy-five years old in 2025, but it is necessary to come up with a new approach to change the nature of the security environment and bring peace back to the Korean Peninsula.