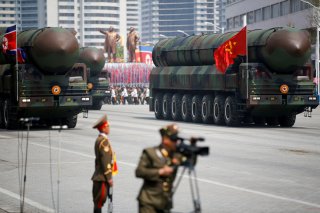 There is little opportunity for movement in U.S.-North Korean relations between now and the U.S. election in November.  While it is possible that contacts at the official levels will continue, the North Koreans have made it clear that they ascribe little value to any meetings below the summit level. They believe that if any deal is ultimately to be made, then it will be made between President Donald Trump and North Korean leader Kim Jong-un.

But Trump is preoccupied with the inter-related subjects of his re-election bid, the coronavirus pandemic, and the U.S. economy and has little time to spend on North Korea. What little attention he has for international affairs is directed towards China and its alleged responsibility for the pandemic.

That is not to say that Trump has given up his hopes for a landmark agreement with North Korea. He clearly attaches much importance to his relationship with Kim and views a potential agreement with North Korea as a signature foreign policy achievement of his administration. Both Trump and Kim attach a high value to their summit meetings. For Trump, a summit with Kim is the ultimate spectacle. For Kim, summits with the president add to his status as well as his legitimacy both internationally and domestically. However both timing and the pandemic rule out any possibility of a Summit this year before the American election.

So until the election, Trump will want to maintain the status quo with North Korea and do nothing to precipitate a breach in relations so that an agreement can be pursued in the future.

For his part, Kim recognizes Trump’s desire for an agreement and the unlikelihood of making substantive progress towards any such agreement in 2020 before the U.S. election. He also recognizes that the combination of Trump and South Korean president Moon Jae-in offers an unprecedented opportunity for an agreement that is unlikely to recur soon if there is a change of U.S. administration as a result of the November election.

In the interim, Kim wants to strengthen his missile capability and his hand both for future negotiations and for dealing with a new administration, if necessary, while not provoking a strong reaction from the United States.

North Korea’s  missile tests in recent months demonstrate that North Korea has concluded that the impasse with the United States will not be broken prior to the U.S. election in November and that Kim is confident that he can continue this sort of testing without retaliation from the United States.

These are carefully calibrated tests meant to upgrade North Korean missile capacity while not straying over what Kim believes to be Trump’s red lines.

One of these red lines would be an ICBM test. Another would be a nuclear test. Kim would expect that either would prompt a strong U.S. response and so is unlikely to proceed with either. However, short of that, Kim seems to have been given a form of Carte Blanche by Trump to proceed with his testing.

Despite the current impasse, Kim still views Trump as the likeliest U.S. president to reach a deal with him. So if Trump is re-elected, Kim would anticipate further negotiations. In this regard, he will have willing interlocutors in Trump and Moon.

Kim will be banking on the assumption that Trump will continue to see an agreement with North Korea as perhaps the key foreign policy achievement of his presidency, one that had eluded all his predecessors.

However, a readiness by Trump and Kim to resume negotiations after the U.S. election will not lead to a substantive breakthrough until and unless the parties can reach agreement on the definition of denuclearization and one or both of the parties is prepared to shift their hitherto unmovable positions. Otherwise the Hanoi Summit impasse is bound to recur.

In this regard, there is no reason to believe that Kim is any more willing to give up his nuclear arsenal than he has been in the past. For Kim, the security of the regime is the top priority and nuclear weapons are essential for that security. Anything short of that could be negotiable including a freeze on testing and enrichment and closure of some facilities in return for substantive reduction or removal of sanctions.

Kim would count on Trump’s eagerness to reach a deal to persuade him to accept something less than full denuclearization from North Korea.  In this regard, Kim will be assisted by the absence of  former National Security Adviser John Bolton, a particular bête noir of Pyongyang, and a strong restraining hand on Trump at the Hanoi Summit.

A breakdown in negotiations with a re-elected Trump would lead inevitably to new tensions and the probable resumption of nuclear and ICBM testing in 2021 and beyond by a strengthened North Korea.

By the same token, if the Democrats win the election in November, a new incoming Biden administration would face the same dilemma facing each new U.S. administration for the last three decades, namely the need to confront a North Korea with an enhanced missile and nuclear capability greater than that faced by its predecessor.  That administration would have to choose from a range of policy options where there are no good choices, only least-bad ones.

James Trottier is a Fellow of the Canadian Global Affairs Institute, a lawyer and a former career Canadian diplomat who was accredited to North Korea and led four Canadian diplomatic delegations to North Korea in 2015 and 2016 while directing political/economic (diplomatic) affairs at the Canadian Embassy  in South Korea and serving as diplomatic liaison to U.S./UN Forces in South Korea.  He also headed political/economic affairs at the Canadian Embassies in Thailand and the Philippines, was Chargé d’affaires to Myanmar and served at Canada’s Permanent Mission to the UN in New York. He has written and commented extensively on North Korea for print and electronic media and in expert forums.