Will a Waning Moon Reduce the Opportunity for Peace on the Korean Peninsula? 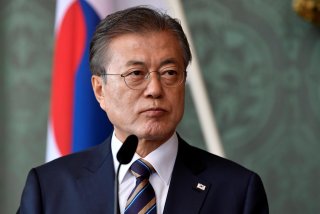 It is possible the technically unconcluded Korean War could be formally over by the time of its seventy-fifth anniversary in 2025. The governments of North and South Korea could decide any time to sign a peace treaty; most likely it would not happen unless Washington was also supportive. But the lack of a peace treaty sixty-seven years after the armistice halted major Korean War combat operations illustrates the depth of the conflict between the two Koreas and the immensity of the obstacles preventing a reconciliation.

Since Moon Jae-in’s ascendancy to the presidency of South Korea in May 2017, the Peninsula has had a period of over three years that has been favorable to producing a peace treaty. Shifting direction from two previous conservative South Korean presidents, Moon has been near-desperate to achieve detente with Pyongyang, championing economic aid to the North and even arguing that sanctions relief should precede de-nuclearization. During this same period, the United States had a president who expressed respect for Kim Jong-un but low regard for U.S.-ROK military exercises and for the alliance itself. The opportunity for a peace treaty, perhaps even involving significant concessions from the other side, was seemingly available to Kim. Instead, however, he opted during the Hanoi Summit to demand major sanctions relief in exchange for the closure of some obsolete nuclear research facilities. When that failed, he closed off diplomacy rather than turning it toward pursuing a “peace regime,” one of the goals Kim and Trump had agreed to the previous year in Singapore.

This window of opportunity is temporary. Moon’s term will end in 2022 and President Donald Trump could be out of office as soon as January 2021. Despite time being short, at the moment Kim seems uninterested in a peace treaty. In keeping with the pattern of past North Korean leaders, his regime is now back to menacing and belittling Seoul following an apparent thaw in relations.

Given the events of the past five years, the emergence of a peace treaty in the next five years looks improbable, although it is possible Kim or his successor could decide that pursuing a peace treaty is to North Korea’s tactical advantage.

Perhaps the most important point is that a formal end to the Korean War would be little more than a scrap of paper as long as North Korea is ruled by a government that values nothing above its own survival and sees permanent peace with Seoul as a threat to that survival. Mutually-hostile multi-state nations are not unique in international politics. What is most unusual in the case of the Koreas is that the weaker and poorer of the pair is the more belligerent (in contrast to China-Taiwan). In this situation, a peace treaty would not by itself preclude Pyongyang from continuing its well-practiced approach of trying to extort concessions from the South by threatening military action. The two Korean governments have made numerous joint statements of peace, most recently in 2018.  The efficacy and staying-power of these agreements is symbolized by the smoking ruins of the Inter-Korean Liaison Office in Kaesong, which was built in 2018 and dynamited by the North Koreans on June 16, as part of a new campaign to intimidate Seoul.