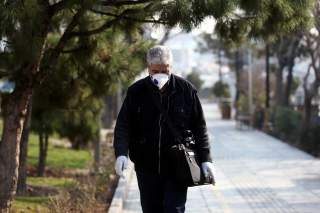 As the coronavirus is creating upheaval in much of the world and dominating headlines, the reactions of different countries to the crisis bear examination. The novel coronavirus strain that started in China spread to the vast majority of the countries in the world but has affected some counties more than others. The outbreak in Italy has put Europe on edge and killed hundreds of Italian citizens. The U.S. government downplayed the threat and is now bracing for what’s to come.

But Iran has been hit especially hard. So far, Iran has confirmed over ten thousand infections and four hundred and twenty-nine fatalities. The virus began spreading in Iran in the city of Qom, a city known as a religious capital that is home to many of the country’s prestigious seminaries and shrines. Iran’s healthcare system is being tested and there’s much second-guessing about the government’s performance. The Iranian government’s reaction to the initial coronavirus fatalities was, by most accounts inside and outside the country, either slow or naïve. South Korea declares a “war on coronavirus” promising to marshal all government resources to fighting the disease. Rome declared a full national lockdown to break the contagion chain. Iran has instituted many measures to bring the situation under control but has yet to embrace the kind of lockdown-type initiatives taken on elsewhere.

Iranian officials initially downplayed the problems as many others had (and continue to do). President Hassan Rouhani initially called for a return to normalcy and even said that large gatherings can go ahead provided that health instructions are followed. Delayed action on the restriction of movement resulted in an increase of travel between cities that likely resulted in the spreading of the virus. Officials did not cancel the Parliamentary elections that were scheduled just days after the initial fatalities. The order to shut down schools and university campuses came much later than it should have. Among the public, there is palpable panic among some but the level of traffic and all the open storefronts give at least the city of Tehran a bizarre feeling of normalcy.

Despite the immediate concern that people traveling to Qom for religious pilgrimage and education would contract the disease and infect others upon returning home, some of the clerical bodies that oversee much of the schools and shrines in Qom opposed the closing of shrines and aggressive measures like quarantine. But arguably the statement most indicative of the naiveté of the Iranian reaction was the statement from the Minister of Health who said he is not supporting a quarantine of the city of Qom because he believes “the people are so wise, upstanding and with character that, after receiving the proper information from us, they will themselves take the proper precautions and observe self-quarantine.”

Decision Making in a Crisis

While there is no shortage of gaffes, miscalculations, outrageous lapses in judgment and grave mistakes in the reactions to the coronavirus issue from political leaders and even health officials around the world, it is worth examining what series of factors may have contributed to Iran’s slow response and why the Iranian government is still not exploring measures like a regional or national lockdown.

The fundamental problem stems from poor crisis situation decision-making, biases in bureaucratic thinking and structural inadequacies. First, Iranian officials were slow to understand how quickly the disease can spread. Iran has a competent medical infrastructure with quality and accessible healthcare. It also does not have the almost unmanageably large population that China does. This seems to have generated a sense of false security where officials assumed normal precautions could stem its spread. Officials, including health officials, also seem to have severely underestimated the capacity of this disease to spread.

Immediate response by local authorities seems to have been ad hoc and untethered to any strategic plan to confront the issue. The constant presence of domestic factional rivalries may have played a role as they often tend to impose decisionmaking limitations on more vulnerable mid-level actors, who lack political clout, and disincentivize bold action based on up to the minute data. Further, there is a clear lack of authority on the part of local and mid-level officials to impose limitations on movement or issue public reports. Who has the authority to take action is not always clear and those with some authority, like the aforementioned clerical bodies, seem apoplectic at the prospect of taking such action based on the advice of outside medical specialists, particularly when those experts operate under the auspices of a branch government under the control of policy rivals.

The result is that mid-level government agents, lacking authority and worried about blame, tend to engage in the bureaucratic ritual of funneling, where the information is sent to the top in deference to the higher authorities. Like a game of telephone, funneling under these circumstances is exceedingly slow and often muddles the message with a tendency towards downplaying. Iran’s bureaucratic culture is ill-suited to defer to outside experts. Countries tend to do far better on this issue when confronted with national security issues. If there were provable reports of a vast foreign intelligence infiltration in Qom, every independent public institution and local politician would differ to intelligence and military officials. But countries struggle to rally against enemies they can’t shoot and rare, scientifically-complicated emergencies tend to require institutional knowledge that was lacking here.

Another barrier to taking the initiative may also have been Iran’s strategic and public culture of perseverance. As a part of Shia tradition in general, this mindset has been strengthened as the country has dealt with economic sanctions, threats, isolation and terrorism, with the goal of frustrating the intentions of enemies ranging from the United States to ISIS. While this may generally be healthy, it is defined by a bias against behavior modification. The default choice is to keep calm and carry on. This helps explain why so many regular people don’t shelter in place. This, combined with any government’s natural preoccupation with avoiding panic, also helps explain delayed action and resistance to aggressive quarantine measures.

It is worth mentioning that this particular factor isn’t necessarily Iran-specific. Speaking on the mistakes Italy made, former Italian Prime Minister Mateo Renzi said “a lot of people, for example, decide … [to go to] the theater or to museum because the reaction is, don't be afraid. We go to theater. This is a good reaction when there is an attack of terrorist. We show our resilience. When there is a virus, we have to avoid, to stay in a public place. So, don't waste time. Italy wastes time and this was a mistake.”

The sanctions also play a role in this emergency in more ways than one. U.S. sanctions have taken a heavy toll on Iran’s healthcare apparatus and the country’s public health. While “humanitarian trade”—that includes medical commerce—is formally exempted under the sanctions, financial and logistical sanctions make paying for and receiving medical supplies and pharmaceuticals from beyond the country’s borders difficult if not impossible. The sanctions also harm Iran’s domestic medical sector and industry as they impede the import of raw materials, the courting of investment, the acquisition of manufacturing and design equipment, and building research partnerships. While the Treasury Department did issue a General License to address this issue on February 27, the damage cannot be undone overnight.

But where this factors into decisionmaking about aggressive options like quarantines relates more to the general health of the country’s economy. With Italy and Europe bracing for the economic consequences of their extraordinary measures, one can imagine how much more concerned Iranian officials are with how a people barely maintaining their standard of living in a sanction-hit economy can absorb the blow of ordering a general halt to much of the nation’s economic activity.

Iran is taking much greater action to limit movement now, but it still falls well below what many inside and outside the government feel is necessary. Many of these problems can also affect future government reactions to other issues like natural disasters as well. Additionally, while Iran will likely manage to control the outbreak sooner than later, history shows viral outbreaks tend to fade in the warmer months only to reemerge in the fall with devastating consequences.  For Iran to minimize the harm to public health, officials need to address the staffing, structural and cultural shortcomings that resulted in a suboptimal response.