A 3-Step Program for War-Weary Yemen 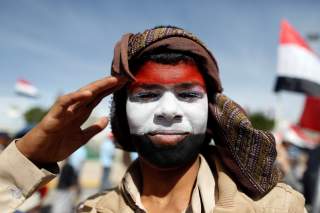 Can Yemen be put back together again? The short answer to the question is, yes, it can be repaired, and for the sake of regional stability and security, the country must be repaired. A divided Yemen will result in years of on and off war between the north and south; southern Yemen will be more of a haven for militant Salafi groups like Al Qaeda in the Arabian Peninsula (AQAP) and Iran may deepen its relationship with the Houthis in the north. A divided Yemen is a recipe for chronic instability and conflict in a country that occupies a strategic position along one of the world’s most important trade routes.

The problem with a divided Yemen is that a majority of the country’s population of twenty-eight million live in the north and most of Yemen’s natural resources, its oil and gas, gold and other minerals, as well as its last untapped aquifers are in the south. The north, which is more populous, more socially cohesive, and well-armed will fight to secure access to those resources. Without them, northern Yemen is not viable as a nation over a long-term period.

It was the discovery of oil combined with deteriorating economic conditions in the south, in what was then the People’s Democratic Republic of Yemen (PDRY), which partly drove it to join the north, what was then the Yemen Arab Republic (YAR). In 1990, north and south Yemen joined to become the Republic of Yemen with the former president of the YAR, Ali Abdullah Saleh, as the president of a unified Yemen with the former president of the PDRY, Ali Salem al Beidh, as vice president. Both men thought that they could get the better of the other, but Beidh underestimated Saleh and was outmaneuvered.

The result was a brief civil war in 1994, when the south declared itself independent and tried to secede from the newly formed union. However, the north was victorious and what followed was years of formal and informal punitive measures against the south by the north. South Yemen’s former leaders, bureaucrats, and military officers, many of whom were better educated and more experienced than their northern counterparts, were either fired or exiled. The north, under the leadership of Ali Abdullah Saleh, captured most of the revenue generated by the oil that was then coming online and invested very little of the proceeds back into the south.

This, of course, created bad blood between the north and south. The north and its security forces, often under the guise of counterterrorism operations, persecuted leaders and members of political groups in the south, most of whom only led peaceful demonstrations and were not, at least at that time, calling for secession. Concurrently, the economic neglect of the south, high unemployment, and ample money from Saudi linked “charities” helped fuel the growth of militant groups such as what was to become AQAP.

At the same time that the Saleh-led government was persecuting the leaders and members of southern political groups, it was also engaged in a vicious war against the Houthi rebels in the far northwest of the country. The reasons for the formation and rise of the Houthis are complex, but they bear some similarities with the rise of the southern-based opposition. The Houthis, like those in the south, were politically and economically marginalized. As Zaidi Shia, they were threatened by the construction of Salafi schools and centers in what they regarded as their traditional homeland.

During the 2011 revolution that led to the resignation of longtime Yemeni president Ali Abdullah Saleh, the Houthis further cultivated what were already cordial relations with various leaders within southern activist groups. The shared experience of persecution and these relationships could have produced results during the post-Saleh 2013 National Dialogue Conference. However, the conference failed to build a true consensus, due to machinations by Saleh and his loyalists, outside powers like Saudi Arabia and the UAE, and by the failure of northern elites to fully recognize the grievances of the southerners and the Houthis alike.

After the Houthi takeover of Sana’a in September 2014, there was still an opportunity to resolve the crisis in Yemen. Before the Saudi and Emirati led intervention began, the then UN Special Envoy for Yemen, Jamal Benomar, said that all sides were close to signing a power-sharing agreement. However, this agreement, which would have necessarily given the Houthis a place in a future government, was not acceptable to Saudi Arabia which viewed the Houthis as a threat.

The Saudi and Emirati led intervention ended any hopes of national reconciliation and power-sharing, set in motion a set of interlocking wars, and created the world’s worst humanitarian crisis. Now the Emiratis, who have realized that they cannot win in Yemen, are withdrawing most of their forces. The Emiratis have supported, trained, and armed a host of southern militias, most of which are dedicated to the recreation of an independent south Yemen. Intermixed with many of these militias and supposed security forces are militant Salafis, some of which have ties to AQAP. For its part, Saudi Arabia continues to support the internationally recognized—although weak and unpopular—government in exile of Abdrabbuh Mansour Hadi.

The Saudi and Emirati led intervention in Yemen, which the United States has supported and continues to support, has achieved exactly the opposite of what it aimed to achieve. Instead of defeating the Houthis, they are more powerful than ever and their ties with Iran, which were minimal when the intervention began, have deepened. Rather than bringing stability, the intervention has ensured years—if not decades—of instability. Furthermore, the conditions for a dramatic resurgence in AQAP and other militant groups could not be better. Yemen is, now more than ever, awash in weapons and its population is more impoverished than it has ever been.

So, is there a way back from the chaos that the intervention has brought to Yemen? Yes, Yemen can once again be a unified country with a functioning government. However, the first step toward de-escalation and eventual reunification in Yemen can only come about if—and when—outside powers end their involvement in the country. Saudi Arabia, the UAE, and Iran must stop funding and arming what are, in the case of the Saudis and Emiratis, a mushrooming number of militias and “security forces.” So long as money, weapons, and materiel continue to flow to these militias and their commanders, there will be little or no impetus toward de-escalation and eventual disarmament.

Second, the Saudi- and Emirati-imposed blockade on north Yemen must be lifted. The blockade does nothing to stop weaponry from coming into the country since the primary source of the Houthis’ weaponry is the coalition itself. The Houthis buy or capture what they need from the coalition-backed proxies. However, the blockade is the major contributing factor to Yemen’s humanitarian crisis. Millions of Yemenis face slow starvation. Lifting the blockade will immediately get more food and aid flowing into Yemen and will revive what is left of the Yemeni economy, which in turn will help rebuild ties between the north and south.

Third, the international community should put its efforts behind restarting Yemen’s National Dialogue Conference, or some iteration of it. It must recognize that both the Houthis and South Yemenis will play significant roles in any future unity government. Some relationships between the Houthi leadership and the emergent southern leadership remain intact and could be fundamental to restoring some semblance of order in Yemen.

However, if Saudi Arabia and the UAE continue to fund and arm their proxies—proxies that are now at war with one another—then they will ensure what could be decades of low-intensity warfare in Yemen. This will only benefit Iran and militant Salafi groups like AQAP. For its part, Tehran will be pleased to see Saudi Arabia spend years and billions of more dollars fighting a war that it cannot win. AQAP and other militant Salafi groups will feed off the chaos, poverty, and desperation in Yemen like vultures off carrion.

Any reconciliation in Yemen will be messy, fraught, and prone to sporadic outbreaks of fighting. However, reconciliation and the eventual formation of some kind of unity government are the only paths to a stable and peaceful Yemen.

Michael Horton is a fellow at the Jamestown Foundation. He is a frequent contributor to Jane’s Intelligence Review and has written for numerous other publications including: The National Interest, The Economist, West Point’s CTC Sentinel, and The American Conservative.