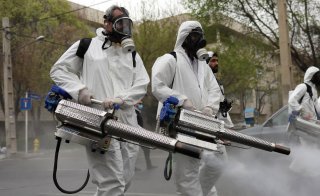 Iran is undercounting the coronavirus death toll by an “order of magnitude,” Professor Hazhir Rahmandad said at a Thursday morning video conference hosted by the Middle East Institute.

Iranian officials have touted their ability to screen the health of the population even as the country struggles to implement social distancing. But the rate of testing for the coronavirus itself remains low. Rahmandad used a mathematical model to estimate the true number of coronavirus cases—with harrowing results.

At the time, the number of cumulative confirmed infections was 19,644, and the official death toll was 1,433. This means that the official statistics were—and likely still are—lower than the true rate of infection and death by an “order of magnitude,” Rahmandad, a dynamic modeling expert at the Massachusetts Institute of Technology, explained.

Eight million Iranians then traveled over the New Years' holiday. The number of cumulative confirmed infections is now 64,586, with a death toll of 4,110, still lower than Rahmandad’s pre-holiday estimate.

“If you go from Iran to other countries, we do think similar undercounting is happening, but at very different magnitudes,” Rahmandad claimed. He said that a large number of asymptomatic or mild cases, fear of going to hospitals, and low testing capacity all contribute to a lack of detection.

Iranian health officials say they have used an app to screen 50 million Iranians for symptoms, but the testing rate for the virus itself is much lower.

Health ministry spokesman Kianush Jahanpur announced on Thursday that Iran had conducted 231,393 coronavirus tests. The total population of the country is over 80 million, meaning that only 0.29% of the population has been tested in total.

Iceland has been testing one percent of its population per day.

U.S. banking sanctions had initially slowed down Iran’s purchase of virus test kits from Europe, although China and the World Health Organization supplied their own test kits, and the U.S. Treasury later loosened banking restrictions on Iran to allow for medical trade.

Rahmandad and his coauthor, Dr. Navid Ghaffarzadegan of Virginia Tech, used other statistics to fill in the testing gap, including suspected coronavirus deaths recorded by Iranian hospitals and the number of infected Iranians discovered at foreign ports of entry.

“We assumed the official data is not falsified,” Rahmandad said. “It is just coming from a process that is limited by the testing capacity.”

Of course, it is possible that the official statistics are lower than even the true number of detected cases.

Dr. Kamiar Alaei, the co-founder of the Institute for International Health and Education, pointed out at the same Middle East Institute conference that the Iranian government rescinded permission for the international aid group Doctors Without Borders to work in Iran.

“The concern was not just their presence inside the country,” Alaei said. “It was the access to national data.”