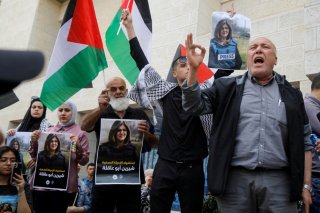 Within minutes of the killing, Palestinian officials had implicated the Israel Defense Forces (IDF), arguing that the Palestinians involved in the fighting had been far away from Abu Akleh’s position and could not possibly have targeted her. Initial Israeli reports argued that Palestinian gunmen had shot at Abu Akleh and other nearby journalists; these reports have largely been walked back. Aviv Kochavi, the chief of the General Staff of the IDF, claimed early on Thursday that it was “unclear” who had fired the shots.

“At this stage, we cannot determine by whose fire she was harmed,” Kochavi said. “We regret her death.”

Shortly after the incident, the IDF released a video showing Palestinians shooting at Israeli soldiers near the Jenin refugee camp, strengthening the contention that armed Palestinian fighters had been in Abu Akleh’s vicinity prior to her killing. Soon after, Israeli prime minister Naftali Bennett argued that Palestinians were responsible for the shooting, “according to the data we currently have.”

Bennett accused Palestinian anti-Israel fighters of “fir[ing] wildly … [leading] to the unfortunate death of the journalist.”

Al Jazeera, Abu Akleh’s employer, disagreed, claiming in a statement that she had been “assassinated in cold blood” by “Israeli occupation forces.”

The Qatari state-owned network cited news producer Ali al-Samudi, who was standing near Abu Akleh during the incident and who was also wounded during the shooting. Samudi later argued that both he and Abu Akleh were wearing protective vests and helmets clearly labeled “Press,” making it impossible that they could have been mistaken for either Israeli or Palestinian fighters. The producer also claimed that Palestinian forces had already left the area where the shooting took place, adding that “we would not have gone in” if they had remained.

The United States condemned the killing, although it did not attempt to assign blame.

“We are heartbroken by, and strongly condemn, the killing of American journalist Shireen Abu Akleh in the West Bank,” State Department spokesman Ned Price said in a statement. “The investigation must be immediate and thorough, and those responsible must be held accountable. Her death is an affront to media freedom everywhere.”