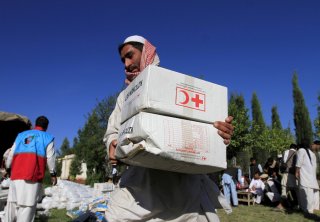 As the chaotic withdrawal from Afghanistan at the Kabul airport continues, U.S. forces are madly attempting to meet an August 31 “red line” date imposed by the Taliban. Meanwhile, humanitarian efforts conducted by international aid organizations and Nongovernmental Organizations (NGOs) have dropped precipitously. A major concern for these organizations going forward is the potential for poor treatment by the Taliban, which developed a reputation for mistreating foreign workers during its first period of rule during the 1990s.

However, even as other NGOs depart, the International Committee of the Red Cross (ICRC), more commonly known as the Red Cross, has committed to remaining in the country and continuing its health mission there.

Red Cross staff confirmed the decision over the weekend, pointing out that the aid group had worked in Taliban-controlled areas during the active phase of the conflict and were welcomed then.

The situation in Afghanistan remains dangerous, despite the end of hostilities following the collapse of the internationally recognized Afghan government. On Thursday, a suicide bombing at the Kabul airport killed a dozen U.S. soldiers and nearly 200 Afghan civilians, injuring hundreds more. The attacks have been blamed on ISIS-K, a local offshoot of the Islamic State terror group based in Iraq and Syria.

Another factor complicating the humanitarian situation in Afghanistan is the country’s ongoing economic problems. In the past week, UN officials have attempted to solicit an additional $800 million in donations to pay for humanitarian assistance in the country.

Prior to its collapse, eighty percent of the internationally recognized budget was sourced from aid from the United States—aid that Washington will not supply to the Taliban.

In addition to the conflict, Afghanistan is experiencing a historic drought, now accompanied by famine. If current trends persist, one-third of Afghans are likely to face food insecurity in the coming year if further aid is not provided. Moreover, there continue to be negative consequences from Afghanistan’s attempts to contain the coronavirus pandemic. Afghanistan has one of the lowest vaccination rates in the world—with only around two percent having received one dose, and around one-half of one percent fully vaccinated. The worst effects of the virus, however, have largely passed the country by, owing to its relatively youthful population.

The Red Cross also served in Afghanistan under the Taliban in the 1990s, and its staff has asserted that the group has a “very good working relationship” with the Taliban.