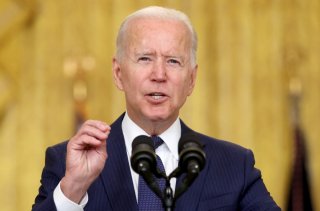 President Joe Biden has promised to hunt down the people responsible for the massive suicide blasts outside of the Kabul Airport, which killed at least thirteen U.S. service members and dozens of friendly Afghans. Actions are certain to unfold, raising the question of what they may look like.

The U.S. military is experienced and adept at hunting and killing terrorists, which raises questions about the types of operations might be conducted in the days ahead. While the Pentagon is understandably going to be quiet about its operations, it seems likely that any contingency is likely to involve heavy amounts of air surveillance and special forces. The U.S. coalition has for many years now enjoyed air supremacy in Afghanistan, something which will likely continue to be leveraged moving forward as the United States looks to find and kill the terrorists responsible for the bombing.

Infrared sensors can detect the heat signature from people or moving vehicles, and long-dwell overhead surveillance can help establish patterns of life sufficient to build intelligence about potential targets. Once targets are isolated or successfully identified, targeted precision air strikes can bring highly accurate and successful results, while reducing risk to nearby civilians.

Since terrorists are often adept at hiding from aerial surveillance by moving under cloud cover or otherwise obscuring their movements, actual special operations forces raids might wind up being the best option for attack, once a target location is identified. There is also the possibility of some kind of forward operating firebase like the kind that was used in Iraq against the Islamic State. F-22 Raptor jets were even used to attack and kill ISIS leaders and key locations. It is likely that the United States will make use of its air supremacy and close-air support platforms to support special operations raids or some kind of infantry advance.

Islamic extremists such as the Islamic State of Iraq and the Levant–Khorasan Province, also known as ISIS-K, deliberately blend in among civilians as a way to hide from attackers and even use human shields to a certain extent, yet the right kinds of overhead surveillance, coupled with special operations on the ground and long-range targeting sensors, might make it easy to find, pinpoint and destroy a few key ISIS-K strongholds like was done in Iraq.

It is unlikely the Defense Department will favor putting any kind of mechanized force or large conventional force back on the ground in Afghanistan, as the risks and problems associated with that are well known. ISIS-K is not believed to be a large group, so the primary initial challenge may simply be one of intelligence. If America’s intelligence community can find and identify them, then they can be destroyed.