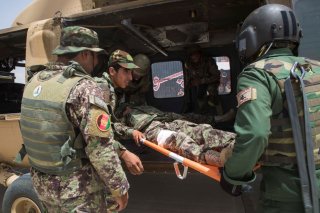 In June, a group of Afghan commandos was executed by the Taliban following their surrender. The massacre was recorded on a video, which was later obtained by CNN.

As the regular Afghan army continues to struggle against the Taliban, and hundreds of its soldiers have surrendered in the face of the Taliban offensive, Afghan commandos have played a decisive role in the fight to contain the militant group. Afghanistan’s special forces have reportedly engaged in dozens of raids per night, checking the Taliban advance but exhausting many of the nation’s elite soldiers.

In recognition of their importance, the Taliban have shifted their tactics to single the commandos out. In a separate incident, a group of commandos was lured into a rural area and ambushed, although the unit managed to escape safely.

The unit in the video is less fortunate. After having been told to surrender and laying down their weapons, the commandos are put in a line and shot by chanting Taliban fighters. Afghanistan scholar Patricia Gossman describes the incident as a war crime.

The massacre raises fresh questions about Afghanistan’s future. A key part of the Taliban’s propaganda effort has been the encouraging of defections among the Afghan army; its propaganda website claims that soldiers who surrender without fighting will be left alone. While the commando unit in the video had fought against a Taliban assault for several hours prior to the massacre, the fact that they were shot after surrendering might give other Afghan soldiers pause before surrendering in similar situations.

The incident has also precipitated a stream of criticism toward President Joe Biden’s decision to withdraw from the country by September. Although the Taliban offensive preceded Biden’s announcement, it dramatically escalated as U.S. troops withdrew – a clear violation of the withdrawal agreement the group negotiated with the United States in February 2020.

Rep. Adam Kinzinger (R-Ill.), a former U.S. Air Force pilot who served in Afghanistan, denounced the massacre and argued that it was a consequence of President Biden’s decision to leave. "This is horrible—yet it's the reality of announcing the U.S. withdrawal from Afghanistan," Rep. Kinzinger tweeted. “Removing the peacekeepers and leaving the Afghan people without support is a grave mistake, Mr. President.”

In a speech on Thursday, July 8, Biden defended his decision to withdraw in spite of the Taliban offensive. At the same time, however, he has publicly supported Afghan President Ashraf Ghani and Chairman Abdullah Abdullah, inviting the pair to the White House and reiterating full political and economic support for the Afghan government.