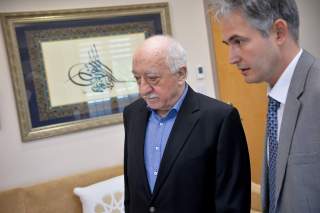 The United States has not lapsed into a dictatorship, contrary to some of the rhetoric which accompanied Donald Trump’s election as president two years ago. There is much to criticize in his administration, but so far the American republic survives.

However, there were reports—denied by Trump—that he was considering targeting the rule of law to promote foreign interests. The administration allegedly threatened to subvert the extradition process to placate Turkey’s authoritarian leader Recep Tayyip Erdoğan to insulate Saudi Arabia’s dictator, Crown Prince Mohammed bin Salman, also known as MbS, from his role in ordering the murder of journalist Jamal Khashoggi. In this case, two wrongs would make an atrocity.

The epicenter of the controversy is Turkish Muslim cleric Fethullah Gülen. The Pennsylvania resident and green card holder went into exile in the United States almost two decades ago. He has publicly promoted a moderate Islamic message and created a large network of businesses, schools, and other institutions around the world. Critics impute more nefarious hidden motives to his activities.

It’s hard for an outsider to judge such claims. Many individuals and organizations within the so-called Hizmet movement do non-political good works. However, Gülen once allied with Erdoğan as the latter gained control and consolidated power in Turkey. The two later had a bitter falling out as policemen and prosecutors, some Gülen followers, led seemingly well-grounded corruption investigations targeting Erdoğan and his associates. The regime responded by purging the security services of Hizmet members.

Then came the 2016 coup attempt. Erdoğan blamed his erstwhile Islamic ally even before the plot had collapsed—and well before anything was known about its genesis. Although there were “Gülenists” involved, they appeared to play only a secondary role. Indeed, the movement never had significant influence within the military.

Erdoğan played the failed coup rather like Adolf Hitler used the Reichstag fire: as a fortuitous opportunity to crush critics as well as enemies. Indeed, there were suggestions that the Erdoğan government was aware of the plot but chose to allow plotters to proceed in hopes of reaping political gain. The truth may never be known.

The claim that Gülen—aged and in fragile health, a resident of a nation allied with Turkey, and already subject to extraordinary international scrutiny—organized a military putsch seems far-fetched. European intelligence services doubted the possibility. U.S. officials who rejected Ankara’s extradition request obviously were not impressed with Turkey’s evidence.

For instance, supposed confessions collected in the midst of a brutal crackdown cannot be trusted. The regime launched an indiscriminate dragnet, arresting anyone with the slightest connection to Hizmet, torturing suspects, retaliating against independent judges, and suppressing dissent—even by schoolchildren. Some 50,000 Turks have been imprisoned. Another 150,000 have been forced from their jobs, both public and private. Journalists, academics, politicians, and others who criticized Erdoğan were treated most harshly, often charged as terrorists. Indeed, the regime now calls Hizmet as FETO, the Fethullahist Terrorist Organization, without any evidence that Gülen or his followers committed terrorist acts.

Ankara sharply criticized the United States for allegedly sheltering Erdoğan’s enemy. In fact, the Turkish president inadvertently confirmed claims that he was arresting foreigners to use as bargaining chips when he publicly offered to trade American evangelical pastor Andrew Brunson for Gülen. Nor was Brunson the only American detained in dubious circumstances. A dozen others languish in prison, but without Brunson’s visibility. For instance, Turkish-American Serkan Golge, a NASA scientist, was arrested while vacationing in Turkey. Ankara also barred his wife and two sons, U.S. citizens all, from leaving. Turkey’s “evidence” that Golge was a terrorist was that he had an account in a bank owned by a Gülenist and possessed a dollar bill, supposedly a symbol of the conspiracy. Others arrested include university professors and a real estate agent.

Despite Erdoğan’s loud demands for Gülen’s extradition, the former might prefer Gülen to be free, allowing the Turkish president to blame Washington for his troubles. Gülen is modest and soft-spoken. Hard to demonize, he would not be a good villain in a show trial. Politically he is more useful to Erdoğan in America than Turkey.

Even without Gülen, Ankara is pursuing his followers around the world. No proof of involvement in the coup is needed—many victims have only a vague, distant, even imagined connection to someone or something linked to Hizmet. Ankara made extradition requests to eighty-three nations for hundreds of people. In some cases the Erdoğan regime pressured friendly governments to grant extradition. Turkey also sent a flood of dubious warrants to Interpol. When legal means failed, the regime simply kidnapped its targets. Before being appointed as President Trump’s first national security adviser, Michael Flynn, who lobbied for Turkish interests, allegedly was involved in just such a plot involving Gülen.

Internationally, Turkey has been moving away from America. Erdoğan emphasized his hostile attitudes by facilitating the Islamic State’s operations in the early years of the Syrian civil war; his son is thought to have handled Syrian oil captured by the Islamic State. More recently, the regime threatened to attack U.S. forces in northern Syria working with Kurdish militias. Although a North Atlantic Treaty Organization member, Ankara has developed growing political and military ties with Russia.

The administration maintains the fiction of a bilateral alliance, making little response to Erdoğan’s growing dictatorial tendencies and hostile foreign policies. However, until now President Trump seemed prepared to allow the legal process involving Gülen to proceed unhindered. Which meant the administration made no obvious effort to thwart the law and hand over a legal U.S. resident to a dictatorial regime in which a fair trial was not just unlikely, but inconceivable.

Until now, it seems.

As part of its fixation on Iran, the Trump administration tightened its relationship with the even more aggressive and reckless Saudi Arabia. Long a totalitarian and intolerant state domestically, Riyadh funded Islamic radicalism abroad, including in America, and provided both money and manpower to terrorists, including Al Qaeda. The crown prince’s foreign policy has been particularly shameful and dangerous: starting a brutal war of aggression against Yemen, kidnapping the Lebanese prime minister, and launching a political offensive—backed by military threats—against Qatar. He inaugurated some economic and social reforms but simultaneously intensified political repression.

Most dramatically, his government recently murdered, in its Istanbul consulate, the American resident and dissident journalist Jamal Khashoggi. Amid a cascade of lies, Riyadh eventually acknowledged that its officials were responsible for the gruesome murder. The only question was how high the decision went. A hit on an American resident and high-profile journalist, by a fifteen-man hit squad, using both consulate and consular residence in a leading Muslim nation and U.S. ally, almost certainly required MbS’s approval. Furthermore, the CIA reportedly uncovered evidence pointing to the crown prince’s assent. The murder was shocking but unsurprising: the regime has kidnapped, imprisoned, and executed many critics over the years.

Turkey, engaged in a battle for political supremacy in the Middle East, has used the Khashoggi murder to embarrass and weaken MbS. The weight of evidence has forced even the Trump administration to criticize the Saudis, but officials have done everything possible to exonerate the crown prince. So desperate are they to protect a murderer in high position that they reportedly ordered the Justice Department to initiate a new review of the Erdoğan government’s extradition request for Gülen.

An administration official told the Turkish Hurriyet Daily News that U.S. officials already had spent more time on his case than others. The source complained about the difficulty in meeting the “very high evidentiary standard.” Time was necessary to ensure that when a request is formally made, “it is detailed enough to have a chance of success.” In general, there must be “probable cause” that the claimed act is covered by an extradition treaty and the subject committed the crime. Many activities typically are excluded from extradition, including political offenses. Thus, whatever the administration’s intentions, extradition remains a legal rather than political case. Even Secretary of State Mike Pompeo acknowledged that “it’s mostly a Justice Department issue.”

Of course, this hasn’t stopped administration officials from politicizing the matter. According to the source, “The U.S. and Turkey have been discussing the Gülen network for many years. It is a positive story in recent months that we have stepped up our cooperation.” But positive for whom?

This enhanced “cooperation” might have been the quid pro quo for Brunson’s release. The latest alleged administration mandate is even clearer: find grounds to sacrifice Gülen. (The administration said NBC’s story was “mistaken,” but the television channel claimed several sources.) According to NBC: “The renewed efforts, however, come as Trump administration officials are seeking to placate Erdoğan over Khashoggi’s murder.” Send the modern sultan’s critic back, and Ankara might go easy on Saudi Arabia’s wannabe-king.

The only good news, according to NBC, is that Justice Department officials have pushed back. They understand that this issue is a fundamental red line for America’s commitment to the rule of law. The administration would lose any remaining moral authority if it sacrificed a man’s liberty and even life to assist one abusive ruler in his paranoid crusade against critics to protect an even worse dictator from accountability for murder.