Are Israel and the Arab States Allying Against Iran? 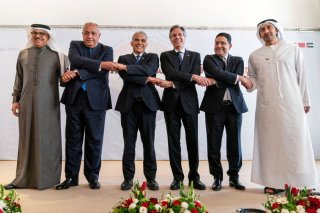 Since the U.S. invasion of Iraq, the Obama, Trump, and Biden administrations have sought to revive the first strategy in order to reduce U.S. military casualties and refocus the United States on the challenge posed by a rising China.

Although the Russo-Ukrainian War has temporarily caused America to pay more attention to the Middle East and its energy resources, the Biden administration is still seeking to reduce the American military footprint there. In this regard, the idea of a “Middle East NATO”—first suggested by the Trump administration—gained new attention as President Joe Biden traveled to the Middle East. However, the concept has many drawbacks for the region and the United States.

Israel, with U.S. support, is trying to expand security and intelligence cooperation with Arab countries along the Persian Gulf, building on the Abraham Accords signed at the end of President Donald Trump’s term. One of the goals of Biden’s trip to Saudi Arabia was to lay the groundwork for the normalization of relations between Riyadh and Jerusalem.

Saudi normalization with Israel would mean that Riyadh no longer supports the 2002 Arab Peace Initiative that was proposed by then King Abdullah and set the creation of an independent Palestinian state as a precondition for improving relations. It is unlikely that the Saudis will go this far while Salman remains king; it is unclear what concessions Riyadh might demand from the United States or Israel.

Accordingly, after Biden’s visit to Saudi Arabia, Adel Al-Jubeir, the Saudi minister of state for foreign affairs, responded to a question about his country joining the Abraham Accords by saying, “we need to have a process, and this process needs to include the implementation of the Arab Peace Initiative … Saudi Arabia will not fully normalize relations with Israel until a two-state solution with the Palestinian population is reached.”

However, the Saudis and Israelis are able to cooperate to some extent through their mutual links with U.S. Central Command (CENTCOM). Israel was previously part of European Command; the shift allows Israel to focus more on the threats it perceives in Syria, Lebanon, and Iran. Earlier this year, CENTCOM participated in an operation with Britain to seize boats carrying Iranian weapons to Yemen. Britain, which belatedly announced the operation, asserted that the weapons transfers violated UN Security Council Resolution 2216.

The Abraham Accords can be considered and imagined as a counter-arrangement to the Joint Comprehensive Plan of Action (JCPOA). Of course, this does not mean that if the nuclear deal with Iran comes to fruition, the order based on the Abraham Accords will not continue.

At the same time, Abu Dhabi announced that its relations with Israel are not aimed against Iran. Accordingly, the UAE has raised its level of relations with Iran to the ambassador level.

Israel knows very well that while the UAE intends to converge and improve relations with countries like Syria and Iran, it is still considered one of the enemies of the axis of resistance throughout the region, a clear example of which is seen in the war in Yemen. In addition, the UAE will never be among the supporters of the Palestinian cause. Jerusalem is also aware that convergence with Iran and Syria will not cause Abu Dhabi to give up its alliance with Israel.

However, while the Persian Gulf Arabs will expand and deepen relations with Israel, they disagree with the Israeli contention that that problems with Iran should be resolved through war rather than diplomacy. In this regard, Anwar Gargash, the UAE minister of state for foreign affairs, has stated that the idea of a confrontational approach with Iran is not something that the UAE welcomes.

Nevertheless, the likely scenario following the JCPOA’s failure will be the escalation of tensions in the region and the faster spread of Israel-Gulf Arab rapprochement according to the Abraham Accords order.

The United States and Israel have also spoken of creating a joint air defense system to include Saudi Arabia, Egypt, Jordan, the United Arab Emirates, Bahrain, and Qatar to deal with Iran’s ballistic and cruise missiles and drones.

This issue was one of the focal points of Biden’s recent trip to Israel and the Persian Gulf region. At the same time as Biden was in Israel, Jerusalem presented a new laser beam called the “Iron Beam” (designed to counter the threat of Iranian drones) to the U.S. president.

The idea of an Israeli-Arab alliance against Iran does not comport with the fact that Iran’s Arab neighbors have different attitudes toward Tehran. Countries such as Oman, for example, do not see Iran as a security threat in the same way that NATO members regard Russia.

Israel, on the other hand, considers Iran an existential threat and has made clear that it will undertake a variety of actions to confront Iran’s nuclear, missile, and drone programs. Israel has pushed the level of conflict across Iran’s borders in the form of a strategy of “death by a thousand cuts” and a so-called “Octopus Doctrine” that includes the assassinations of Iranian scientists and sabotage of Iranian facilities.

Countries such as Saudi Arabia, Egypt, and Jordan, while trying to contain Iran and create a balance against it, are also engaging in diplomacy to reduce tensions. They may be wary of formalizing military cooperation with Israel that could leave them vulnerable to Iranian retaliation.

Concerns about an increase in tension with Iran led Egypt to reject the Trump administration’s Middle East Strategic Association (MESA), an earlier iteration of the “Arab NATO” idea. Egypt also had doubts about whether Donald Trump would be re-elected and whether his successor would continue the plan.

In fact, the formation of a “Middle East NATO” would upset the current balance of power in the region and likely lead to an increase in conflict. In a speech at the National Islamic Conference in Beirut, Ismail Haniyeh, the head of the Hamas political bureau, said that the plan targets resistance movements in Palestine and Lebanon. While Iran has so far not retaliated within Israel for Israeli attacks on Iran, Tehran could increase support for partners such as Lebanon’s Hezbollah and Hamas in the Gaza Strip to counter any new Israel-Arab alliance.

Following Israel’s threat of “preemptive” attacks against Iran, Iranian president Ebrahim Raisi threatened Jerusalem with “preemptive attacks” of its own and said: “Israel should see the distance between decision and action, and if they decide to act against Iran, they may not have a deadline to act, and the gap between this decision.”

The expansion of regional cooperation centered on Israel and based on the Abraham Accords has another meaning for America. One factor in the new U.S. push for Israeli-Arab military cooperation is to blunt Chinese and Russian intrusion. The Pentagon has raised concern over China and Russia’s expanding presence in the Middle East, and Washington has pressured its regional partners to limit their engagements with Beijing and Moscow. Of course, the Arab countries also know that China and Russia are not suitable substitutes for America in the region. These countries are not capable of establishing a regional order, nor do they have the desire to do so now.

However, a “Middle East NATO” would be politically controversial in the United States, and would formalize America’s commitment to an authoritarian status quo.

On the other hand, the failure of the JCPOA and the increase in tensions will cause America’s desired regional order—based on the strategy of “offshore balancing,” i.e., disengagement—to become “onshore balancing” (engagement), provoking more U.S. regional military involvement and jeopardizing U.S. efforts to contain China.

It would risk dragging the United States into conflicts that stem from regional players’ ambitions and objectives and reduce the incentive for them to find ways to peacefully coexist with their neighbors.