Baghdadi Is Dead. Does that Mean ISIS Dies with Him? 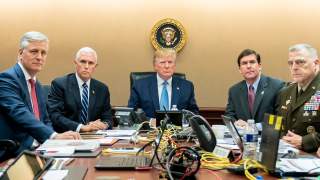 Before Abu Bakr al-Baghdadi was killed “after running into a dead-end tunnel, whimpering and screaming and crying all the way” as President Donald Trump put it so eloquently, the Islamic State leader was the world’s most wanted man. With a $25 million price tag on his head, Baghdadi had was in the scope of multiple nations. The United States, Russia, Iran, Iraq, Syria, the U.K., France, and Turkey all had a reason to kill him. The crimes he was ultimately responsible for spread across continents, from the Paris assault four years ago this November to the enslaving of Yazidis in Iraq.

That man is no longer walking this earth, having been surprised by a team of U.S. Delta Force operators descending from helicopters and breaching his Idlib compound at the dead of night. Trump, beaming with pride that he was the one who authorized the operation, boasted about the mission hours later. "The thug who tried so hard to intimidate others spent his last moments in utter fear, and total panic and dread, terrified of the American forces bearing down on him,” Trump announced at the White House Sunday morning. He then went on to briefly thank everybody else who assisted with the mission; U.S. operators were reportedly acting in part on intelligence acquired from the Iraqis, who arrested some of the terrorist leader’s intimate family and associates months earlier.

U.S. special operations forces make raids like this look easy. But Baghdadi was an elusive figure, surviving years in the shadows even as the thousands of his fighters died on the battlefield and his territorial caliphate shrank to a narrow sliver of trash and human misery in the Syrian town of Baghouz. It was only a matter of time before Baghdadi was surveilled and neutralized. Indeed, it wouldn’t be at all surprising to learn that the terrorist chief himself was planning for his death well before this weekend. Such is the nature of the business: if you’re at the top of the hierarchy, sooner or later you will be killed in an airstrike or a ground raid. Just look at the numerous deputies and number three officials in Al-Qaeda who perished in the last decade.

Even so, Baghdadi was a major get. For U.S. intelligence officials who have been assigned to him, confirmation of his death is likely to be a relief. The man has been reported dead numerous times in past years. In October 2015, Iraqi officials claimed that Baghdadi was seriously injured after a convoy he was traveling in was hit near the Iraqi-Syrian border. In June 2017, Moscow put out a rumor that he was struck in an airstrike against top ISIS leaders in Raqqa. A month later, the Syrian Observatory for Human Rights disclosed that the terrorist chieftain was killed in Deir ez-Zor. In February 2018, U.S. officials said a May 2017 airstrike in Raqqa wounded Baghdadi to such an extent that he was removed from daily operations for five months. Whether any of these reports were true was never really determined, but they all added to the suspense.

Now that Baghdadi is no longer ruining lives, the inevitable question is: what’s next? The Islamic State was in a bad way even before Washington took away its caliph, and it’s hard not to assume that Baghdadi’s removal will deal an even bigger blow to a group already hunkering down to save itself. ISIS’s leadership was prepared for the time when their so-called caliphate was burned to the ground, and their fighters have responded by transitioning into a classic insurgency. The Pentagon assesses that 14,000-18,000 ISIS militants are still operating in Iraq and Syria, numbers that Al-Qaeda’s Ayman al-Zawahiri could only dream of.

Nor will Baghdadi’s death mean the imminent demise of the Islamic State as an organization. The United States has experienced this moment before: think Abu Musab al-Zarqawi in 2006, Abu Ayyub Al-Masri in 2010 and Osama Bin Laden in 2011. Killing the top commander is highly unlikely to kill the group; indeed, it’s far more likely to scramble the ranks until a replacement is settled on. And make no mistake: it could be days, weeks, or months, but ISIS will eventually announce a replacement for Baghdadi.

Today, however, the Trump administration is celebrating—as are the millions of people who either lost loved-ones or were forced into service on behalf of a warped caliphate.