Is Bibi Down for the Count? 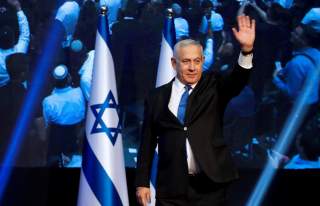 Israel’s attorney general unveiled two long-awaited indictments against Prime Minister Benjamin “Bibi” Netanyahu. It was a one-two punch to the country’s long-serving leader just before a likely third round of elections in a year.

Netanyahu has been accused of taking bribes from wealthy businessmen and cutting backroom deals with media companies to manipulate press coverage in his favor. In a sign of the malaise setting in over the Netanyahu camp, his normally talkative former campaign spokeswoman, Rachel Broyde, refused to comment on the indictment or new elections to the National Interest. Only a few days before, she had been eager to talk about the future of the Palestinian territories.

“This is the real deal,” said Harry Reis, Director for Policy and Strategy at the New Israel Fund. “The charges that came down from Attorney General Mandelbilt were as serious as they could possibly be.”

Both Netanyahu and his rival, Lt. Gen. Benny Gantz, failed to scrape together a majority of votes in Israel’s parliament to hold the prime minister’s office. And time is not on Netanyahu’s side, as he has been counting on parliamentary immunity to escape multiple accusations of corruption.

“It is not a matter of left or right or of politics. This is our duty,” said Attorney-General Avichai Mandelbilt. “It is sad for me personally and for the country.”

“[Netanyahu] can only prolong the process,” added Elisheva Goldberg, the New Israel Fund’s media director. “But he’s going to throw as much sand in the face of the Israeli public as he possibly can.”

“I am not surprised that Netanyahu [has been] charged [with] corruption charges,” Mohammad Darawshe, director of the Center for Shared Society at the Givat Haviva Institute and former director of the United Arab List, wrote in a text message to the National Interest. “His personality has shown that he is capable of crossing all [decent] lines of morality.”

Even if the Right remains in power, they may see Netanyahu as a liability—prompting the Likud Party to dump him as their figurehead. Gideon Sa’ar, a member of Netanyahu’s own Likud Party, is trying to overthrow Netanyahu with an early primary election.

“The members of Netanyahu’s own party are thinking a bit differently,” Goldberg said. “We’ll see what happens with the internal Likud leadership. But right now, everyone is re-assessing where they actually fall.”

Netanyahu can still ask the Knesset, Israel’s parliament, for immunity in a process that takes thirty days. But it is an untested legal question whether he can continue to serve as prime minister while under indictment. And if no one steps forward as a serious candidate for Prime Minister in the next three weeks, the Knesset will be dissolved and another round of elections will be held.

Reis emphasized that Netanyahu had dissolved the Knesset twice earlier this year in order to “assemble a coalition that would deliver for him total immunity from these prosecutions . . . what he was doing was playing poker with the very checks and balances that are fundamental to Israel’s democratic character in order to save himself.”

But the last election, held in September, backfired on Netanyahu. It left his and Gantz’s parties neck-and-neck and allowed an Arab-led left-wing alliance called the Joint List to become the third-largest party in the Knesset.

In order to break the tie, Netanyahu or Gantz needed the support of two of the three smaller factions in parliament: the Joint List, the Jewish religious parties, or Avigdor Lieberman’s secular nationalist Yisrael Beiteinu. But each faction was radioactive to the other two.

The prospect of a “minority government,” where the Joint List would back Gantz without joining his coalition, alarmed Lieberman, who called the Joint List a “fifth column.” Netanyahu tried to use this fear to his advantage.

“A minority government that is dependent on the Arab parties is an existential threat to the State of Israel,” Netanyahu said in a November 16 post on Facebook, calling the Joint List “terror supporters.”

Israel gave citizenship to Palestinians and other Arabs within the country’s borders in 1949, but did not extend the same offer in the territories it captured in the Six Day War of 1967. Arab citizens now make up about one-fifth of the Israeli electorate.

“Netanyahu's speech wasn’t a campaign kickoff—it was an attempt to incite a civil war,” responded Ayman Odeh, head of the Joint List, in a Twitter video. “The more Jews and Arabs hate each other, the more he benefits. His only hope is our despair.”

“Netanyahu deserves facing his crimes and his paying for them,” said Darawshe, whose United Arab List is one of the four parties in the Joint List. “His racist campaign against the Arab citizens in the last few months shows he has no respect for the laws against incitement and hides behind his parliamentary immunity.”

In the last election, Netanyahu’s party stoked fears of an “Arab-leftist government” and tried to block a get-out-the-vote initiative for poor, rural Arab voters backed by the New Israel Fund.

But the latest round of comments provoked a direct intervention from Israel’s ceremonial president Reuben “Ruvi” Rivlin, who used his statesmanlike office to denounce both Netanyahu and Lieberman’s rhetoric.

“We who live as sovereigns in our country, the Jewish and democratic State of Israel, must ensure equality of rights and respectful and meaningful discourse with all Israelis,” he said in a press release, echoing an earlier rebuke he had made in March.

Reis, underscoring the efforts of civil society organizations like the New Israel Fund in urging Rivlin to condemn Netanyahu’s rhetoric, said that civil society will have an important role in “hold[ing] the government accountable to its highest democratic ideals.”

“Like any leader who is a populist leader, as Netanyahu is, and as [U.S. President Donald] Trump is, their style of politics outlasts their own political careers,” Goldberg said. “But in terms of where this leaves us, it leaves us in a better place than where it could be. Gantz has [also] made it his mantra to go back to…a responsible government with civil discourse."

“We shouldn’t be overly optimistic about it. These men who are running [Gantz’s party] Blue and White are still on the political right when it comes to the question of a Palestinian state,” Goldberg added. “But I do think that the call against incitement, and the call for decency, is an important one.”

Indeed, the most enduring legacy of the Netanyahu era may be for the future of the Palestinian territories that Israel captured in the 1967 war. In the last campaign, Netanyahu promised to annex part of the West Bank, which would end long-held hopes for a “two-state solution” involving Israel and an independent Palestinian state.

On Monday, the U.S. Department of State revoked a legal opinion condemning Israeli civilian settlements in the West Bank, seemingly giving Israel the green light to continue its control over the territories.

The next day, Netanyahu used the U.S. decision to urge Gantz and Lieberman to join him in a unity government to annex parts of the West Bank: “The nation and history will not forgive whoever misses this historic opportunity.”

“I welcome the announcement and urge other countries follow suit,” Broyde told the National Interest at the time. “[I]t reject[s] false narratives that the Jewish People are foreign colonizers in the area.”

Gantz similarly applauded the U.S. decision as a sign of America’s “firm adherence to Israel and its commitment to security and the future of the entire Middle East.”

“It is good that what has always been clear to us is getting such a seal,” added his political partner Lt. Gen. Moshe “Bogie” Ya’alon. “One cannot be an occupant in his own land.”