The Case for Leaving Syria 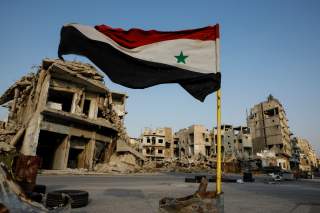 Professor Michael Howard, the eminent British historian, frequently stated, “Wars are not tactical exercises writ large… They are conflicts of societies, and they can be fully understood only if one understands the nature of the society fighting them.” The professor must have anticipated the Syrian Civil War.

In Syria, the civil war that killed as many as 400,000 people is over. Moscow’s ally in Damascus, President Bashar al-Assad, is the victor.

It’s true that the predominantly Sunni Arab opposition—virtually indistinguishable from a broad range of Sunni Islamist terrorist groups—to Assad clings to life inside Syria’s Idlib enclave, but its days are numbered. Thanks to an agreement reached between Russian President Vladimir Putin and Turkish President Recep Tayyip Erdogan, Sunni jihadist forces will eventually leave the demilitarized zone, patrolled by Russian and Turkish forces.

Meanwhile, U.S. forces, together with forces from Russia, Iran, the Syrian government and Iranian-backed Shia Arab paramilitaries, have essentially erased Islamic State-controlled territory from the map. Clearly, an American military withdrawal from Syria would seem in order, right?

Unfortunately, President Donald Trump’s Special Envoy to Syria, Ambassador Jim Jeffrey, is already recasting the American military mission in Northeast Syria as both ensuring the enduring defeat of ISIS and as “contesting more actively Iran’s activities particularly in Iraq, Syria and Yemen.” Jeffrey adds, “This means we are not in a hurry to pull out.”

In the Northeast corner of Syria, anti-Western Marxist Kurds remain committed to an independent, national homeland in Syria—a development that Ankara views as an existential threat to the Turkey. Since Syria’s U.S.-equipped Kurdish militia provides the backbone for Washington’s anti-ISIS ground force Washington keeps special forces troops in Syria to work with the Kurds, thereby placing 2,000 U.S. troops directly in the path of a potential Turkish Army offensive.

Israel is acutely sensitive to what happens in Syria. Until fifteen Russians were killed in an accident Moscow blames on Israel’s fighter jets, Russian acquiescence allowed Israelis to launch more than 200 air and missile strikes against Iranian military sites inside Syria. Israel wants the 2,000 U.S. troops in Syria to remain and act as a shock absorber for Israel; obstructing the movement of people and arms from Iran to Iran’s ally Hezbollah in Lebanon and protecting Israel’s potential Kurdish ally from Turkish attack.

In sum, the Syrian civil war is over and the “enemy of my enemy” principle applies to all of the regional actors. There are no moderates among the Sunni Arab or Kurdish factions, Turkey is at most a paper ally, and Washington’s strategic partners—Israel and Saudi Arabia—have interests that do not necessarily align with President Trump’s stated goal of building regional stability.

The United States has no strategic interest in Syria that justifies a war with Russia, Iran or Turkey. A war with any of these states would destroy the prosperity that President Trump has worked tirelessly to create. Instead, it makes sense to withdraw U.S. forces. An American military withdrawal from Syria would eliminate the fragile strategic rationale for Russian-Turkish cooperation in Syria and severely obviate the few shared interests that tie Iran to Russia.

Moscow does not view its interest in Damascus in isolation from Israeli national security or the Islamist threat to Russia. Erdogan’s clandestine support for his Islamist allies is never far from Putin’s thoughts, and Putin knows that Tel Aviv has nothing to gain from hostility toward Moscow.

Given this strategic picture, Professor Michael Howard would advise President Trump to simply “get out” of Syria. Like most Americans, Howard would not be persuaded that further developments in Syria are, or plausibly could be, a serious threat to the United States, but congress is another matter.

Members of both parties need cash to fund their re-election campaigns and the liberal interventionist-neoconservative foreign policy machine is strictly bipartisan. The machine has cash, but it is fighting a losing battle.

Americans are not interested in war. In 1975, it was “No more Vietnams;” today, it’s “No more Iraqs, Libyas, Nigers, Somalias, Afghanistans” or any number of self-defeating interventions in dysfunctional societies and failed states.

Now, on the precipice of more cuts in defense spending with the survival of Social Security, Medicare and Medicaid at stake, the misguided use of U.S. military power and the disaster it creates are not affordable. Politicians and their dependence on donors for reelection guarantee a slow death to the employment of U.S. military power as the global shock absorber, but it is dying.

Colonel (ret.) Douglas Macgregor, U.S. Army, is a decorated combat veteran, a PhD, and the author of five books. His latest is Margin of Victory, Naval Institute Press, 2016.