Coronavirus, Be Damned: Iran Set to Try and Reopen Economy 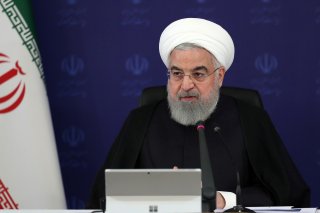 Iran’s trade union head Saeed Membini said that 75% of all union shops outside of Tehran will return to work on Saturday despite the lingering threat of the novel coronavirus.

Iranians have been forced to choose between their livelihoods and their safety as the coronavirus pandemic sweeps through Iran in the midst of an economic meltdown. Health officials warned against restarting economic activity before the coronavirus was brought under control, but they have apparently acquiesced as the Iranian government draws up plans to reopen certain businesses.

The Chamber of Trade Unions of Iran has submitted to the government a list of “low-risk” businesses that can be reopened and “high-risk” businesses whose “activities require more people and must be closed until further notice,” Membini told the semi-state-run Tasnim News Agency.

Patisseries and confectionaries are among the low-risk businesses. Membini said that preparations are being made to reopen men’s barbershops as well.

Membini added that low-risk businesses will require a certificate to stay open, and businesses will close again “whenever it is felt that this decision will lead to the spread of the virus.”

President Hassan Rouhani also announced plans to stagger the reopening of government offices, setting hours from 7 am to 2 pm and only asking a third of workers to come in at a time. He also banned people with the novel coronavirus disease from working, an edict that may be difficult to enforce, as the disease can remain dormant for up to two weeks.

Health officials had warned that it was not possible to open the economy with minimal risk. Health minister Saeed Namaki compared the decision to playing with fire in an open letter to Rouhani.

“The slightest move that is reckless and incompatible with expert opinion will lead to irreparable damage,” he wrote. “Its flames will quickly spread to the healthcare system, and subsequently the economy.”

But the health ministry seems to have surrendered, despite its earlier dire warnings.

“We are not talking about impossible and unwanted measures,” health ministry spokesman Kianush Jahanpur told the state-run Islamic Republic News Agency on Wednesday. “The livelihood of the people is important, and today the people’s income and employment is one of the most important socioeconomic factors affecting health, which we cannot ignore.”

Jahanpur announced that Iran has conducted 211,136 virus tests in total, identifying 2.089 new cases in the past day. The novel coronavirus disease has killed 3,993 people in Iran so far.

The Iranian government has gone on an emergency spending spree to try and contain the damage caused, dumping billions of dollars into both health institutions and economic relief payments. Authorities have drained $1.09 billion from the country’s sovereign wealth fund to pay for these programs.

Central bank head Abdolnaser Hemmati said that Iran is expecting another $1.6 billion of Iranian money in a Luxembourg bank to be freed up, after Iran fended off a lawsuit by American victims of terrorism seeking to seize the money.

Iran has also applied for a $5 billion emergency loan from the International Monetary Fund. The United States has promised to oppose the application, claiming that the Iranian government intends to spend the money on terrorism and foreign wars rather than humanitarian relief.