Trump Administration Comes Out Against IMF Coronavirus Aid To Iran 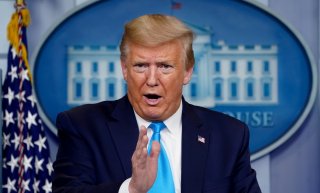 The Trump administration came out against an international line of credit to help Iran fight the novel coronavirus disease on Tuesday, almost a month after Iranian authorities requested the emergency loan.

Iran has struggled to deal with the deadly coronavirus outbreak amidst falling government revenues and a poor economic outlook. The Islamic Republic is now asking the International Monetary Fund (IMF) for a $5 billion loan to deal with the crisis, but the United States holds the largest number of votes on the Washington-based lender’s executive board.

“The world's leading state sponsor of terrorism is seeking cash to fund its adventurism abroad, not to buy medicine for Iranians,” a U.S. State Department spokesperson told the National Interest. “The regime’s corrupt officials have a long history of diverting funds allocated for humanitarian goods into their own pockets and to their terrorist proxies.”

The statement also mentioned a letter by Iranian dissidents calling on the IMF not to grant the Iranian government’s request.

The Trump administration has not previously commented on the loan request. State Department officials declined to comment when asked by the National Interest on March 27.

The IMF has not commented on the status of Iran’s request, but it recently released a list of approved emergency coronavirus loan requests that did not include Iran.

Rear Adm. Ali Shamkhani, head of Iran’s national security council, implied on Monday that the IMF had rejected the loan, denouncing U.S. pressure as an example of “crimes against humanity.”

The European Union has backed Iran’s request for a loan. The union also pledged €20 million in humanitarian aid to Iran, and European chief diplomat Josep Borrell has blamed U.S. sanctions on oil revenues for putting Iran and Venezuela in “a very difficult situation.”

U.S. congresswoman Rep. Ilhan Omar (D–Minn.) had called on the Trump administration to support Iran's request to the IMF.

Several high-profile Democrats said in a March 31 letter to the Trump administration that “targeting an entire economy that supports more than 80 million people” has harmed the Iranian people in their response to the coronavirus pandemic. Former vice president and 2020 presidential candidate Joe Biden wrote a letter of his own calling the Trump administration's policy a compound of "failure with cruelty."

Iranian president Hassan Rouhani lifted a lockdown order this week after his Ministry of Industry, Mines, and Trade asked to reopen businesses in order to meet “the people’s needs.” Rouhani’s health ministry has warned that the measure could spark a resurgence of the disease.

Health ministry spokesman Kianush Jahanpur said that 3,872 people in Iran have died of the novel coronavirus disease as of Tuesday, although the rate of daily infections and deaths has begun to decline.

“The previous administration gave the Iranians a whole lot of money, and we have done remarkable work to deny the regime the resources they need to continue to carry out their terror campaign,” U.S. Secretary of State Mike Pompeo told reporters on Tuesday. Iran’s allies “will continue to have fewer dollars tomorrow until they fundamentally get the Iranian regime to change its model.”