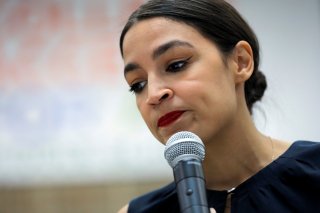 Several centrist Democrats signed onto a letter on Tuesday calling on key Trump administration officials to temporarily lift sanctions on Iran in light of the worsening coronavirus pandemic.

The letter began as an initiative by the progressive wing of the Democratic Party, but the list of signatures has grown to thirty four members of Congress, including several moderates. Domestic and international backlash is mounting against the Trump administration’s self-described policy of “super maximum economic pressure” toward Iran as the country faces the worst coronavirus outbreak in the Middle East.

Rep. Alexandria Ocasio Cortez (D–N.Y.) and Sen. Bernie Sanders (I–Vt.) had signed a draft letter alongside seven other prominent progressive Democrats calling for Secretary of State Mike Pompeo and Treasury Secretary Steve Mnuchin to “substantially suspend sanctions on Iran in a humanitarian gesture to the Iranian people” in late March.

The draft was “mistakenly posted early” to the website of the National Iranian American Council, as several signatories were “negotiating minor changes to the text,” according to the civil society group’s communications director Mana Mostatabi. The final letter was published on Tuesday.

Both versions claimed that “by targeting an entire economy that supports more than 80 million people, U.S. sanctions make it harder for ordinary Iranians to obtain basic necessities like food and hygienic supplies essential to stemming the pandemic and that are basic to survival.”

However, there was one major difference in the final version: the list of signatures had grown nearly fivefold.

Mostatabi said that the National Iranian American Council had “worked with [Ocasio-Cortez]'s office, Just Foreign Policy, Win Without War, and other endorsing orgs to support the letter and secure signers.”

Erica Fein, advocacy director for Win Without War, told the National Interest that the growing coalition between progressives and moderates should not be surprising, given Democrats’ broad support for former President Barack Obama’s agreement with Iran in 2015.

“There are a bunch of members of Congress who were supportive of the [Joint Comprehensive Plan Of Action]’s formulation: Iran would dismantle its nuclear program and allow for intrusive monitoring and inspections and the United States and the five other parties to the agreement would provide broad sanctions relief over time,” Fein claimed. “Most congress members thought it was a huge mistake for Trump to violate the agreement and reimpose sanctions as part of its maximum pressure campaign.”

“So, with the U.S. and Iran on the brink of war and Iran suffering a major crisis from [the novel coronavirus disease], it makes sense to me members of Congress who supported the JCPOA would be supportive of taking action that would ease tensions and provide humanitarian relief,” she concluded.

Fein added in a written statement that the Trump administration’s failure to seize “an opening for U.S.-Iran diplomacy and de-escalation of military tensions” would make it obvious “that their sanctions policy is not a means to an end, but a cruel end unto itself.”

The Trump administration has repeatedly denied that its sanctions have worsened the coronavirus crisis in Iran, instead of pointing the finger at Iranian corruption and mismanagement of the public health sector.

“There are demands that somehow Iran be provided with more resources, more money,” Pompeo told the Hugh Hewitt Show last week. “This is a rogue regime and one that I, for the life of me, can’t understand the previous administration’s policy of appeasement with respect to them.”

This article originally referred to Joaquin Castro by the name of his twin brother Julian. It has been updated with the correct name.