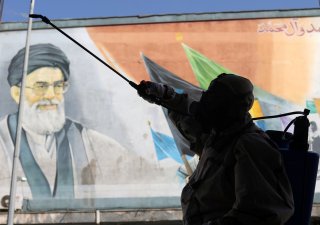 Iranian health ministry spokesman Kianush Jahanpur warned that Iran “will face a new peak of the disease in Tehran over the next seven to ten days” at a Monday briefing on the coronavirus pandemic.

Iran has struggled to implement citywide lockdowns in order to stem the spread of the novel coronavirus, amidst a domestic economic crisis and external economic sanctions. President Hassan Rouhani announced that businesses would reopen across the country this week, soon after the International Monetary Fund (IMF) apparently denied Iran’s request for coronavirus relief.

The novel coronavirus disease has killed 3,739 people in Iran, according to official statistics. The number of daily confirmed new cases is beginning to decline, while the daily death rate has held steady since late March.

Jahanpur warned in his Monday briefing that traffic has already increased in the streets of Iran’s capital, although he claimed that most of the current volume “has no relation to work.”

Rouhani had announced on Saturday that “low- to medium-risk businesses” would reopen on Sunday in Tehran and next Saturday in the provinces. (Iran’s workweek runs from Saturday through Wednesday.) He said that two thirds of government employees would be required to come to work, although high-risk and elderly individuals would be exempt.

Last week, health minister Saeed Namaki reprimanded Iran’s Ministry of Industry, Mines, and Trade for ordering businesses open again against the advice of the health ministry. The ministry shot back at Namaki that businesses would have to reopen to fulfill the “health needs and basic consumer goods of the people.”

Rouhani denied that there was any conflict within his government.

Iran has an outstanding request to the IMF, a Washington-based international lender, for a $5 billion line of credit to help combat the coronavirus outbreak. The IMF has not publicly responded to Iran’s request, but it released a list of countries whose loan requests have already been approved on Friday.

Iran has also repeatedly called for an end to the U.S. campaign of “super maximum economic pressure,” which aims to cut off Iran’s banking, oil, and other sectors from the rest of the world.

Neither the IMF nor the U.S. Department of State have responded to a request for comment from the National Interest as of press time.

U.S. officials deny that humanitarian aid is blocked by sanctions, although they recently dropped their longstanding objections to the European payment channel.

“Some of these countries continue to build bombs and missiles and nuclear capability, all the while their people are starving,” U.S. Secretary of State Mike Pompeo told reporters on March 31. “So when they make the claim that, boy, they just don’t have the money to feed their people, these are decisions that these people, leaders have often made, not in the best interest of those peoples.”

“Well, they haven’t even asked us to do that, okay?” he told reporters in response to a question about sanctions relief on April 3. “I put it out very publicly, with respect to Iran. I said if they need help with respect to the virus, we have the greatest medical professionals in the world. We’d love to send them over.”