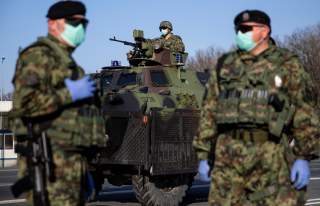 “In the silence of the dawn; tremble, see the funeral processions; ten, twenty . . . no, countless.” Iraqi poet Nazik Al-Malaika wrote these words in 1947 as a particularly savage bout of cholera ravaged Egypt. Almost eighty thousand people died in that epidemic, and discontent over its mismanagement by King Farouk contributed to the young monarch’s deposition five years later. History teaches us that epidemics nearly always have political consequences. They can strengthen states and leaders that can both act quickly and convincingly make the case for expanded power; or they can damage credibility and bring down institutions when leaders do not vindicate the trust and power placed in them, as was the case in Iran in 1904-5.

Pandemics pack an even harder political punch in times of historical transition, which is when the domestic balance of forces and the regional balance of power are both in flux. Across the Middle East, both equilibriums were already reeling in the Middle East before the coronavirus arrived in the UAE from China in early February. Against this backdrop, the responses of Middle Eastern states to the pandemic are deeply shaped by domestic political idiosyncrasies and a complex context of rivalries, enmities, and religious and economic affinities. As the number of victims steadily increases and as the region’s death toll increases, the virus is already serving as a powerful catalyst for political change. After the smoke clears, the implications of the coronavirus will likely endure for generations.

As is often the case in the Middle East, one of the strongest influences on the course of events has come from without. The virus has gutted Asian demand for gasoline, with Chinese oil demand dropping by a staggering 20 percent in early February. Now demand elsewhere in Asia, and increasingly in Europe, is contracting. Already suffering from a booming U.S. shale industry, a shocking drop in oil demand brought oil prices down with it. At the beginning of the month, OPEC convened and agreed to cut oil production, although Russia refused, in the hope of undermining the still-young U.S. shale industry. Saudi Arabia responded with unprecedented price discounts of $6 to $8 per barrel, driving down the cost of Brent crude harder and faster than any time since the onset of the Gulf War.

Crashing oil prices are a major spanner in the works for the Gulf states, which are struggling to diversify their economies and require oil to escape their dependence on it. According to the IMF, Qatar’s breakeven price is $60, while the UAE is around $70 and Saudi Arabia around $80. In mid-March, Brent crude is $34 a barrel and will likely go lower this year. In Saudi Arabia especially, the price war has arrived at an important point of transition. Since 2017, Crown Prince Mohammed bin Salman has gained global prominence with mega-projects such as a $17 billion Red Sea mega-resort and a $500 billion “smart city” with dinosaur robots and a giant artificial moon. This is in addition to political reforms: women can now drive, the kingdom is set to stop funding foreign mosques, a senior Saudi religious leader visited Auschwitz and a major American Jewish organization visited Riyadh. The virus is, in this sense, a shock amidst a shock.

Saudi Arabia is taking more measures to stem the spread of the virus, suspending all international flights, stopping mass gatherings and shutting malls, restaurants, and even parks. Those restrictions, in tandem with a difficult economic predicament, will strain political support among the kingdom’s young population. The annual pilgrimage to Mecca has also been called off for the first time, sparking a muted clerical outcry.  Yet even more importantly, THe coronavirus’s economic knock-on effect is punishing the initial public offering of Aramco, the kingdom’s flagship economic project with which these mega-projects were to be funded. Initially valued at $2 trillion, the crisis has pushed the company under its IPO for the first time since its launch at the beginning of this year.

The pending turbulence of this period, it seems, has led the prince to insulate himself from potential usurpers and dropping public support. Saudi Arabia’s anti-corruption committee arrested some three hundred public servants on Sunday, among them senior members of the military and interior ministry. Several senior royals were also arrested last week, including the brother of King Salman bin Abdulaziz Al Saud, on the day as the OPEC-plus deal fell through. Amidst the turmoil of coronavirus and free-falling oil prices, the Crown Prince Mohammed bin Salman bin Abdulaziz Al Saud is likely to ascend to the throne sooner rather than later, expediting an inevitability and initiating a reign that will define the region for years to come.

Across the Gulf, Iran has become the world’s second greatest victim of coronavirus. Before the onset of the virus, sanctions pushed the rial to record lows and shredded Iran’s oil revenues by up to 70 percent, leading it to massively hike up its fuel tax. This, in addition to the downing of a civilian airliner by the Revolutionary Guard, sparked the most violent anti-regime protests since the founding of the Islamic Republic. An escalation cycle with the United States led to the killing of one of Iran’s strategic master planners, Maj. Gen. Qassim Suleimani, in a U.S. drone strike. Conservative outrage combined with the apathy-fatigue of ordinary Iranians delivered a sweeping result for Iran’s “principalist” hardliners in the parliamentary elections, who increased their seats in parliament by a staggering 75 percent. Iran’s economy and the credibility of its government were both strained before Coronavirus hit; the pandemic has now become a political watershed.

Iran now has over ten thousand cases and, at the very least, a thousand deaths. Medical facilities are overloaded and triage facilities operate in fields and car parks. Yet Iran’s leadership has taken few measures to stem the spread of the virus. Despite requests by local officials, the Iranian National Security Council shot down a proposal to quarantine the two worst-hit provinces, Gilan and Mazandaran, leading some individual governors to take matters into their own hands, attempting to ban the entry and exit of vehicles from their provinces despite government pushback.

The risk of massive popular discontent over restrictions on movement is seen as too risky a political gamble for the regime to take, especially following months of violent protests. While thousands of deaths are a given at this point, it was likely ruled that this would be an easier challenge than a short-term nation-wide curfew with potentially explosive circumstances. Yet preventing protests is one part of a more complex equation. The holy city of Qom, Iran’s ground zero, also remains unquarantined and classes continue in many of the city’s religious seminaries. Only two imams have issued fatwas against visiting Qom and its religious shrines, while many more have either given tepid discouragements or further, have encouraged visits to Shi’a shrines while attacking critics as unbelievers.

An excellent analogy by Amir Afkhami draws from Iran's 1904 cholera epidemic. Clerical pressure forced the government to backtrack from quarantining pilgrims and cities, wreaking the economic havoc that would precipitate the 1905-6 Constitutional Revolution. Today, Iran's government is not in a rut with its religious establishment; the religious establishment is the government and must play its cards carefully if it is to survive. Iran’s President Hassan Rouhani seems set to be the scapegoat for the clerics above him. In the last week, he has been mocked on state television (“taking the advice to stay home too seriously”), thrust into the driver’s seat of the National Council for Combatting Coronavirus by Ayatollah Khamenei and asked to resign by National Medical Council of Iran. Rouhani has insisted that he will serve out the remainder of his term and is in any event ineligible to run for the presidency again. Yet after the failure of détente with the United States, Rouhani is likely to take the hit.

Iran’s foreign minister Mohammad Javad Zarif accused the United States of “medical terrorism” the day before an attack on Al-Taji Air Base by an Iran-backed Shi’a militia in Iraq. What seemed like a one-off strike on the occasion of Suleimani’s birthday was followed by another rocket attack on the same base on Friday. A new militia, Usbat Al-Tha’ereen (the League of Revolutionaries), has surfaced, stating the goal of driving the United States out of Iraq as to humiliate the Trump administration before the election. As Iran grows increasingly desperate under U.S. sanctions, it is likely to use its limited bandwidth to ramp up pressure on the United States, attacking American troops and assets via its proxies, with greater frequency but not a greater scale. This bodes new escalation cycles between the United States and Iran, with Iraq caught in the middle.

Lebanon was in dire straits well before the arrival of the coronavirus. What started with a tax on WhatsApp in October exploded into a nation-wide protest movement, the “Hirak.” In January, the Hirak staged a week of rage to which the government issued a harsh response, injuring over 350 protesters. Meanwhile, the debt stands at an astonishing 160 percent of GDP, youth unemployment is near 40 percent, poverty has almost doubled since the start of the protests and banks have capped withdrawals at $600 a month to prevent capital flight. Dwindling subsidies and late payments from the government have left the Lebanese healthcare system undersupplied, understaffed and in debt. Lebanese prime minister Hassan Diab made the extraordinary confession that the government “is no longer capable of protecting its citizens and ensuring a decent livelihood for them.” At that point, Lebanon had only ten cases of coronavirus. Lebanon has since defaulted on a $1.2 billion bond repayment and has, at the time of writing, ninety-nine confirmed cases of the coronavirus.