Could Donald Trump Force Biden To Accept a One-State Israel? 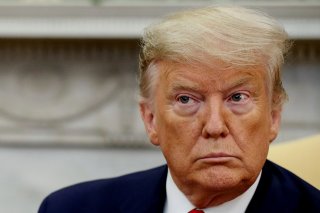 Israeli prime minister Benjamin Netanyahu’s pledge to annex part of the Palestinian territories could present the next Democratic administration with unpleasant choices in dealing with the Middle Eastern state.

The two-state solution has been a bedrock of U.S. policy towards the Israeli-Palestinian conflict since the 1990s. Such a solution would preserve Israel’s democratic and Jewish character by establishing an independent Palestinian state in the disputed West Bank and Gaza.

But the Trump administration’s latest peace plan gives Netanyahu a green light to annex large parts of the Palestinian territories, which could present a fait accompli to the next Democratic president. Netanyahu agreed with opposition leader Lt. Gen. Benny Gantz to hold a vote on annexation in Israel’s parliament by July 1 as part of a unity agreement.

Figures on the American left have begun to talk about planning for a future without a Palestinian state separate from Israel.

“We do need to be studying the alternatives to two states,” warned former Amb. Daniel Shapiro at a Monday event hosted by the Center for American Progress. “They’re all bad.”

But “it is critical we try to understand what those alternatives are” in order to “protect and preserve our interests,” said Shapiro, who worked in the National Security Council under the Clinton and Obama administrations and served as U.S. Ambassador to Israel from 2011 to 2017.

He added that spelling out the difficulties of trying to preserve U.S. interests under a one-state solution may “reinvigorate” efforts to restore the path to a two-state solution.

Mara Rudman, executive vice president for policy at the Center for American Progress, argued at the Monday event that the United States should now focus on presenting a “reasonable horizon that makes sense to people” in the region, and “be open to various configurations of what that might be.”

“We may be talking about a generation” to get back to the two-state solution, she said, arguing that “two-state planning” does not make sense in the near term.

Of course, a one-state solution is far from a guaranteed outcome.

Annexing even the first set of territories faces internal and external obstacles, Shapiro pointed out, including Israeli apprehensions that the next U.S. administration could “leave Israel in a very awkward position” by trying to reverse or “balance out” annexation.

But the Trump administration has granted Israel diplomatic victories in other disputed territories, declaring Jerusalem to be Israel’s capital and recognizing Israeli annexation of the Golan Heights. And it has dropped longstanding U.S. legal objections to the practice of settling Israelis in the Palestinian territories.

Tony Blinken, foreign policy advisor to Democratic presidential nominee Joe Biden, said at a Tuesday event that Biden would not derecognize Jerusalem as Israel’s capital or put conditions on U.S. aid to Israel, although he opposes annexation.

A future administration would have other options to prevent annexation, emphasized Ilan Goldenberg, director of the Middle East security program at the Center for a New American Security and an advisor to Elizabeth Warren’s presidential campaign.

The next administration could promise to “do less to protect the Israelis” from international criticism “viewed as reasonable by the United States” or even unilaterally recognize a Palestinian state, he told the National Interest.

The United States could eventually have to tell Israel that “we support the two-state solution, but if it’s no longer possible, we support democracy” with equal voting rights for Palestinians under Israeli control, Goldenberg said.

“Hopefully, you’re in the mode of deterring, and not responding,” he added. “I would hope the Biden administration would…reverse any American recognition of annexation as part of an early step to reverse a bunch of bad decisions in this space by the Trump administration.”

Grassroots progressives who traditionally back a two-state solution may also be preparing to deal with a future where that is no longer tenable.

“We support a two-state solution for strategic, practical, and moral reasons…because we think it’s the most achievable reasonable outcome,” said Daniel Sokatch, CEO of the New Israel Fund, a U.S.-based progressive organization that supports civil society groups in Israel and the Palestinian territories. “Of course, it may not come to pass.”

“We’ll have enormous roles to play—however successfully we can play them—in trying to make sure that whatever the reality is there doesn’t descend into Balkanized Lebanonization on the one hand, or Apartheid on the other,” he told the National Interest.

But Sokatch expressed hope that the next Democratic administration would heed the “warning” of an impending one-state reality.

“The Trump administration won’t because it’s made it clear that it doesn’t see any problem with Israel taking an approach that would ultimately eviscerate its own democratic character,” he said.