Will Trump’s ‘Deal of the Century’ Strip Israeli Arabs of Their Citizenship? 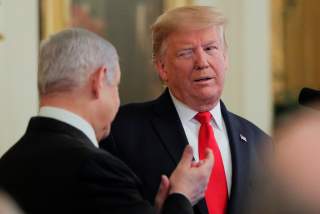 President Donald Trump’s proposal for a final Israeli-Palestinian settlement could strip Israeli Arabs of their citizenship, leaders of the community warned.

The new “deal of the century,” which Trump presented alongside Israeli prime minister Benjamin Netanyahu at the White House on Tuesday afternoon, may remove several communities of Arabs with Israeli citizenship from Israel entirely, in exchange for annexing Jewish settlements in the Palestinian territories.

The peace plan “contemplates the possibility” of redrawing Israeli borders to exclude “the Triangle,” a cluster of Arab communities, according to a document published by the White House after Trump’s speech. Leaders of the Israeli Arab community feared that the plan could strip them of their rights.

“Whoever presented this idea must be totally hallucinating,” Mohammad Darawshe, former director of the United Arab List, told the National Interest. “To assume that this is a pragmatic plan that can be implemented somehow must mean you are on drugs.”

The United Arab List ran in September 2019 as part of the Joint List, a coalition of Arab and left-wing parties. Joint List leader Ayman Odeh slammed the border proposal as “a green light to revoke the citizenship of hundreds of thousands of Palestinian Arab citizens who live in northern Israel.”

Israel granted citizenship to Arabs within its territory, including the Triangle, after winning its independence in 1948. The state also extended a path to citizenship to Palestinians in Jerusalem after annexing the eastern half of the city in 1980.

Trump’s peace plan proposes giving the Triangle to a future State of Palestine, “subject to agreement of the parties,” after which “the civil rights of the residents of the triangle communities would be subject to the applicable laws and judicial rulings of the relevant authorities.”

“This is Kafka. This is Orwell,” said Elisheva Goldberg, who has advised Israel’s former Foreign Minister Tzipi Livni and now serves as media director at the New Israel Fund. “It’s so unclear who the parties actually are.”

She said that the language could mean “transferring people who are full-blown Israeli citizens who have rights” out of the state's protection.

Neither Trump nor Netanyahu addressed the Triangle in their speeches. Netanyahu’s speech focused on Israeli civilian settlements in the West Bank, sometimes referred to as Judea and Samaria, which Israel captured during the Six-Day War.

Netanyahu said during Tuesday’s press conference that the plan will allow Israel to annex the strategic Jordan Valley and “all the Jewish communities in Judea and Samaria, large and small.” His cabinet will vote on annexation on Sunday.

“The very heart of the Land of Israel…has been outrageously branded as illegally occupied,” Netanyahu said, calling these areas “vital to our security and central to our heritage.”

Trump also offered an independent Palestinian state in the remaining territories if the Palestinian leadership agrees to end “incitement to terrorism.” He promised that Jerusalem will be the “undivided capital” of Israel, but the White House document also proposed a Palestinian capital in the eastern suburbs of Jerusalem.

A map of the peace plan shows islands of Palestinian territory connected by bridges and tunnels.

Senate Foreign Relations Committee Chair James Risch (R–Idaho) praised Trump’s plan for “the potential to open the door to economic prosperity in exchange for a departure from violence,” and Netanyahu claimed that it “strikes the right balance where others have failed.”

“This plan looks like Israel’s right-wing wettest dream,” said Darawshe, who is now director of the Center for a Shared Society at the Givat Haviva Institute. “It represents their interests and considers their historic settlement activity as legitimate and final.”

Goldberg speculated that the proposal to remove the Triangle from Israel could be an olive branch to the nationalist party leader Avigdor Lieberman, who has proposed swapping the Triangle for Israeli settlements in the West Bank. Lieberman’s defection from Netanyahu’s government deprived Netanyahu of a clear majority, forcing three consecutive elections in less than a year.

Netanyahu was formally indicted for corruption on Tuesday morning. He has sought immunity as part of any deal with his right-wing coalition partners.

He had run in the most recent election on opposing the influence of Arab voters. Netanyahu’s campaign stoked fears of an “Arab-leftist government” in the runup to September’s election, and Netanyahu himself denounced the Joint List as “terror supporters.”

The Joint List then threw most of its weight behind Netanyahu’s rival, Gen. Benny Gantz, after taking third place in September’s election.

Trump claimed during the press conference that Gantz also supports his peace proposal, although the former military chief of staff did not appear on stage.

The next round of Israeli elections is scheduled for March 2.