Could Lebanon Be Headed Towards Famine? 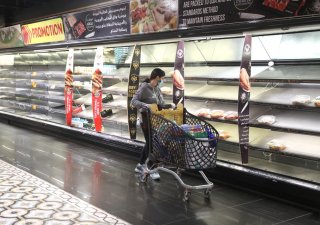 Lebanon’s political class has failed. While the U.S. government often focuses exclusively on Hezbollah, the problem inside Lebanon is much deeper. The first anniversary of the Beirut Port explosion that killed more than 200 people is approaching, but the Lebanese government appears unable or unwilling to explain what happened for fear of offending Hezbollah. For Lebanese, this is not simply an academic or political question, but one necessary to resolve in order to receive insurance payments for damage to their automobiles and property. In effect, the Lebanese elites’ cowardice hits tens of thousands of Beirutis in the pocketbook.

Political gridlock continues. I could try to replicate the details here, but the Carnegie Endowment’s Michael Young is perhaps the best chronicler of Lebanon’s sordid political affairs. Long story short, Lebanon’s political elites appear more interested in how they divide their own spoils and personal access to Lebanon’s resources than they are in stabilizing the country’s economy. The Lebanese pound remains in free fall, as no one takes the official exchange rate seriously anymore. Banks, meanwhile, effectively confiscate dollar deposits by placing strict limits on withdrawals and often force adherence to an official exchange rate that pays pennies on the dollar.

While politicians hand wring and virtue signal about climate change, often lecturing about how global warming could increase drought and famine, the reality is that, while drought is a natural phenomenon, famine is entirely manmade. Ethiopia, for example, always had enough food to feed its population during its famine in the 1980s, but the government lacked the capacity and infrastructure to distribute it. Today, such famine might repeat in Tigray as Nobel Laureate Abiy Ahmed’s government purposely prevents food from entering into the restive province. In 2011, drought again hit the Horn of Africa. Hundreds of thousands died in Somalia as their government floundered but across the border, Ethiopia emerged largely unscathed. Its government may be far from perfect, but it was not at Somalia levels of dysfunction.

The question now is whether Lebanon’s government is at Ethiopian or Somali levels of dysfunction. The United Nations appears to believe that it could be the latter. The UN Department of Safety and Security issued a security alert on June 16, 2021, for the UN Security Management System personnel operating in the country. While not online, it was shared with me.

In view of the deteriorating economic conditions in the country, assorted with the excessive power cuts, shortage in medications and baby food/supply, in addition to emerging fuel crisis and the long queues on the gas stations, as a precautionary measure all UNSMS Personnel and their dependents are reminded… [to] ensure to have enough food and water supply for at least one or two weeks; especially canned products that do not require a fridge; to the extent possible, keep your vehicle fuel tank full… [and] ensure a First Aid Kit available and handy at all times….

Too often, Western leaders and journalists imagine famine is something that only happens in Africa. Famine may still be far from Lebanon, but the country’s political elites have transformed the country from the dysfunction of 2020 to something more. As its currency becomes worthless and political elites, as in Somalia, focus more on looting the country and embezzling aid, the humanitarian situation in Lebanon may soon become far more perilous. The UN now warns about a two-week crisis but the conditions that brought Lebanon to this state show no sign of dissipating. True, the possibility of famine may be an exaggeration given the willingness of the international community to provide aid, but that is essentially the dynamic upon which Lebanon’s elites depend. Essentially, they are holding a gun to the heads of their own population in order to grow their overseas bank accounts and investment portfolios. The question for world leaders is how long they will play Nabih Berri’s, Hassan Nasrallah’s, Samir Geagea’s, Saad Hariri’s, and Michel Aoun’s game. Either way, it is time to recognize that the crisis that now looms in Lebanon could be as impactful to the country as the 1975-92 civil war.