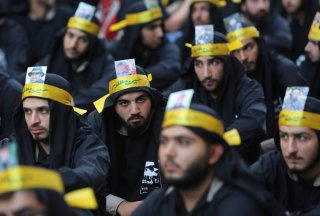 NABATIEH, LEBANON—Hezbollah flags fly from lampposts and billboards feature the faces of Hezbollah members killed in action in this southern Lebanese town which, by some estimates, is now Lebanon’s fifth-largest. Bearded men belonging to the group drive around the streets in new BMWs whose lack of license plates reaffirms their position above Lebanese law.

Nabatieh is Hezbollah’s heartland, less than fifteen miles from Lebanon’s border with Israel. When Israel occupied a southern Lebanon buffer zone, Nabatieh was just outside and so a frontline post for Hezbollah. During the Operation Grapes of Wrath (or the “April War” as Hezbollah calls it), Israel bombed sites in the city. Israel’s unilateral withdrawal in May 2000 bolstered Hezbollah by transforming it into the first Arab force to defeat the Jewish state in war. Hezbollah—and Nabatieh—both suffered during the 2006 Israel-Hezbollah War but the end to hostilities and Hezbollah’s subsequent rearmament against allowed the Iranian-backed militia to depict itself as strong.

Sitting at a tea house on the outskirts of town, locals—including veterans of the fight against Israel—now tell a different story. There are three types of Hezbollah members now, they say. The first are the true ideologues, the second initially embraced Hezbollah’s mission but are now embarrassed by its actions and antics, and the third just signed up for the money.

All have trouble reconciling the group’s rhetoric with reality. While once Hezbollah slogans written on banners and plastered on billboards promised security and prosperity, today locals have neither. Hezbollah members may still receive salaries far above the local rate, but Iran’s financial troubles and subsequent diminishment of its subsidies to Hezbollah lead the group to half their payments leading to grumbling from within and ridicule from without.

The true ideologues, meanwhile, who once painted themselves as the vanguard of a new order must now explain how they and Iran remain impotent in the face of the U.S. assassination of Iranian Quds Force chief Qassim Suleimani on January 3, 2020, and, more recently, the death of Mohsen Fakhrizadeh, the father of Iran’s covert nuclear weapons program, who was assassinated on November 27. Iran, many locals and Western journalists are attributing the assassination to Israel. Iranian leaders and Hezbollah swore they would revenge both attacks but they have been unable to do anything but have like-minded proxies fire a few missiles at U.S. forces and facilities in Iraq, most of which missed or did little damage.

Locals also point to the four thousand Hezbollah members dead in Syria and question not only why an organization that depicted itself as a Lebanese nationalist not only allowed its members to serve as mercenaries for Iran and President Bashar al-Assad in Syria but also why they fared so poorly as they did so. Some ridiculed Hezbollah Secretary-General Hassan Nasrallah as a fifth Teenage Mutant Ninja Turtle since he must be hiding out in the sewers of Beirut’s southern suburbs in fear that if he emerges in person, he will quickly join Soleimani and Fakhrizadeh.

Importantly, citizens in Nabatieh and other towns controlled by Hezbollah or its rival-turned-ally Amal are no longer limiting their criticisms to whispered conversations. Protests erupted last October against the political elite in Lebanon, and young Lebanese—men and women—from Nabatieh joined them. Women took off their scarves and men removed their face masks. Simply put, as Hezbollah becomes a shell of its former self, locals are losing their fear. There is a certain irony that in Washington, DC, Democrats loudly and Republicans a bit more softly suggest that the “maximum pressure” campaign against Iran to be a failure, but in the heart of Hezbollah country, residents tell a different story. Hezbollah is cash-poor, resented, and has lost its luster.

The late Al Qaeda leader Osama bin Laden famously said, “When people see a strong horse and a weak horse, by nature they will like the strong horse.” By that standard, locals no longer consider Hezbollah a thoroughbred racehorse, but rather a lame pony. The question moving forward is whether the Biden administration, in its animosity to President Donald Trump and Secretary of State Mike Pompeo, will snatch defeat from the jaws of victory by pumping resources into the Islamic Republic of Iran, a gravy train which will benefit not ordinary Iranians or the citizens of southern Lebanese towns like Nabatieh, but rather groups like Hezbollah who locals say are a shadow of their former selves.