Death Toll Rises as Iran Cracks Down on Wave of Protests 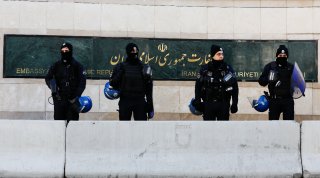 Esmail Zarei Kousha, the governor of Iran’s northwestern Kurdistan province, announced on Tuesday that three people had died during a recent wave of protests in the province, according to Iran’s state-affiliated Fars news network.

Kousha indicated in his remarks that the first of the three fatalities had occurred in the city of Divandareh, and the second in Saghez. He declined to release details on the third casualty, whose death he described as “suspicious,” and indicated that Iranian authorities had continued to investigate.

The provincial leader claimed, however, that the protesters had not been killed by Iranian security forces. “Investigations have shown that these people were shot and killed by those working against the establishment,” he said—asserting that the guns used in the shootings were “not employed by any tiers of security or law enforcement … in the province.”

The governor also noted in his remarks that the current wave of protests was illegal under Iranian law, urging Iranians to stay home.

A series of demonstrations has rocked northwestern Iran since Mahsa Amini, a twenty-two-year-old Iranian Kurdish woman, died in unclear circumstances after her detainment by the country’s religious police for failing to properly wear a headscarf. After her arrest, Amini suffered an unclear medical incident while in custody and was transferred to a nearby hospital, where she died several days later. Although the Iranian police insisted that she had not been harmed while in custody and had died of a heart attack brought about by a pre-existing health condition, her family has explicitly denied this, claiming that she was healthy and speculating that she had been beaten while in custody.

Immediately after Amini’s death, a series of anti-government protests began in Saghez, her home city, and quickly spread to several cities within Kurdistan and to universities in Tehran. Iranian security forces have attempted to disperse the demonstrations using tear gas, water cannons, and small-caliber ammunition, according to local sources and footage posted to social media. It remains unclear how many have been injured and arrested during the protests, but the governor of Tehran, Mohsen Mansouri, announced on Tuesday that non-Iranian nationals had been among those arrested, implying that the protests had foreign backing.

Kousha warned in his address that Iranians wishing to protest should be concerned about supposed “anti-revolutionary” groups intent on using anger over Amini’s death to advance their own goals.