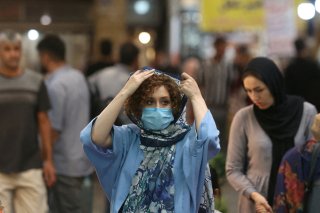 Protests erupted in western Iran on Saturday following the funeral of Mahsa Amini, a twenty-two-year-old woman who died under unclear circumstances following her arrest by Iran’s morality police.

Videos circulated widely on social media showing demonstrators marching in Saqez, Amini’s hometown in Iran’s northwestern Kurdistan province, and in Sanandaj, the province’s capital. During the protests, attendees chanted, “Death to the dictator,” likely referring to Iranian supreme leader Ali Khamenei. Women filmed themselves removing their headscarves in protest of Amini’s initial arrest for not wearing hers. Local police were filmed firing tear gas into the crowd; many of the videos also contain the noise of gunfire, and local reports claimed that birdshot was used against demonstrators. It is still unclear if any protesters were killed or seriously injured in the violence.

The protests surrounding Amini’s death come as part of a broader wave of discontent against the Iranian morality police’s targeting of women for defying the country’s strict Islamic dress code. Offenses against “immoral behavior” have been strictly enforced throughout the Islamic Republic’s four-decade history. However, camera-equipped smartphones and social media have spread awareness and galvanized popular anger against the enforcing authorities.

Shortly after her detention by the religious police, Amini died in a hospital in Tehran. The police claimed that she had fallen ill during her detention and denied reports that they had beaten her; they later released surveillance footage from the detention center appearing to support their version of events, although Reuters observed that the video “appeared to have been edited.” An earlier police statement claimed that Amini had had a heart attack while in custody, although members of her family denied that he had a heart condition.

On Saturday, an Iranian medical examiner announced that the Tehran hospital had conducted forensic tests on Amini, but the results could take up to three weeks to arrive. Iranian interior minister Abdolreza Rahmani Fazli told the country’s state-run television network that there was no evidence Amini had been harmed during custody, implicitly urging demonstrators to return home.

Following the onset of the protests, internet access in Tehran and throughout Iran’s northwest experienced several outages, with internet blockage observatory NetBlocks claiming that there had been a “significant internet outage” in the Iranian capital. The country’s leadership is known to have restricted internet access in other protest-affected areas in the past to control the spread of information.