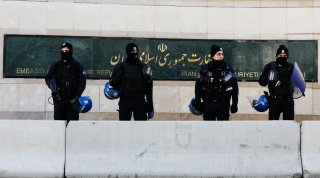 Protests in Iran continued to grow on Tuesday after the death toll from a collapsed residential building in Abadan, a large city in Iran’s southwestern Khuzestan region, rose to thirty-four, with dozens more survivors thought to be trapped beneath the rubble.

Footage circulated widely on social media showed demonstrators protesting against the Iranian government in Abadan, Bushehr, and other cities in southern Iran. Some of the protesters chanted “Death to Khamenei” and “Death to the dictator,” two slogans considered a direct attack on the Iranian governing system. In one video, a protester shouts that the United States is not the enemy of Iran, but “the enemy is right here,” referring to the government of Supreme Leader Ali Khamenei and President Ebrahim Raisi.

Other footage on social media depicts an apparent crackdown on the protests, with riot police on motorcycles seen patrolling city districts that had experienced unrest in order to cow would-be demonstrators. Riot police have also been deployed in some cities, and both tear gas and live ammunition have been used, although there have been no reports of protest-related deaths so far.

The Iranian government has blamed local construction companies and safety inspectors for the building’s collapse, and it has arrested thirteen people for violating construction laws. Iranian state media has featured extensive religious mourning for the dead, and the provincial governor has appeared on state television denouncing “rumors” surrounding the collapse on social media.

In spite of the Iranian government’s efforts, protesters have argued that the building’s collapse is indicative of wider corruption for which the country’s central government is responsible.

Khuzestan has long had a troubled relationship with the central government in Tehran. Although it is rich in hydrocarbons, a sizable minority of the population consists of non-Persian Arabs, who have long accused the central government of discrimination against them. During the summer of 2021, Khuzestan experienced a particularly severe water and energy crisis, with regular blackouts leading to significant unrest.

Tehran’s crackdown on the most recent wave of protests is consistent with the government’s response to previous waves from 2017 through early 2022. The country’s protest movement reached its highest point in late 2019, when tens of thousands of Iranians marched against government corruption, widespread poverty, and attempts to increase the prices of basic goods such as fuel. An estimated 1,500 Iranians were killed in the protests, which continued through the assassination of Quds Force chief Qassem Soleimani in early 2020 until the onset of the COVID-19 pandemic.