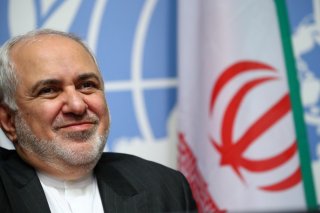 Attentive readers will have noticed an Iranian media campaign of late. Most recently, this has included a strange back and forth between Iran’s foreign minister, Javad Zarif, and Joe Biden’s special envoy on climate, John Kerry. Once the best of friends, Kerry and Zarif have fallen out. Zarif claimed that Kerry had told him details of Israeli strikes on Iranian assets in Syria, to which the Iranian minister says he listened with shock. Stretching credulity, Zarif claims all of this was news to him.

Whereas Kerry claims that Zarif has made the whole thing up; that he did not reveal any operational details; and that he has been painfully double-crossed by a government he simply wants to work with for the good of all. Naturally, all of this has provided fodder for Republicans in Congress, who chide Kerry for any lapses on his part and scorn his going into any meeting with the Iranians under the pretense that they would play fair.

The international press has largely reported Kerry’s denials in full and has broadly taken his side.

But another part of the same taping session has been reported rather less critically. This is the suggestion of Zarif’s that he is caught in something of a domestic political bind. In Iran, Zarif says, the Revolutionary Guards set the timbre for policy. Regrettably, he concludes, it seems that he and the civilian leadership are largely along for the ride.

On the face of it, this might seem exactly the kind of blunt honesty sometimes, invigoratingly, caught on tape. Not least because some of what Zarif says is true. In Iran, the Revolutionary Guards control much of the economy. Their power structures resemble a state within a state. They are a hierarchal organization and monopolize sources of domestic power.

Yet for all the truth of this apparent revelation, there is also reason to be skeptical. Zarif and the president, Hassan Rouhani, have not only headed a government which has sent expeditionary forces to innumerable regional conflicts, and attacked Saudi Arabia and Israel numerous times; they have also presided over a continual push towards nuclear weapons. At every turn, Zarif and Rouhani have supported the military ambitions of the Guards.

And from Zarif, this is all pretty rich. We must politely stop him because we have heard this song before. He continually finds less palatable figures within Iranian politics who might replace him and his masters, swinging Iran further towards expansionism and war.

It is a tack that Zarif in particular has taken for a very long time, not least to sell the original nuclear deal negotiated and enacted under Barack Obama, Biden, and Kerry. Do the deal with us, Zarif threatened, or we will be replaced by rougher men with larger beards who won’t be in the mood to negotiate at all. In that case, six years ago, it seemed to work rather well.

Zarif continually suggests that there is a faction of “hardliners” either responsible for the state’s excesses, or likely to seize power unless the current Iranian leadership is flattered and appeased.

Iran’s leadership, especially under the presidency of Rouhani, has theatrical arguments in public with apparent hardline factions—claiming the hardliners are too aggressive, or even too willing to negotiate with America. All this has left some American diplomats and policymakers increasingly convinced that these hardliners are a paper opposition, an imagined or constructed threat.

There are certainly fundamentalist and theologically conservative forces in Iran which are not in government. Ditto the Guards, who are theologically extreme and enjoy the waging of war. But the idea that the fundamentalists or the Guards would usurp power seems unlikely. So too the notion that—if they did so—such people would do less than Zarif and Rouhani to overrun Iran’s neighbors, to take foreigners hostage, and to commit acts of terrorism worldwide.

John Bolton sums up the views of many in his book The Room Where It Happened when he notes that dictatorships love holding out the threat of a near-term worse option: an even more aggressive, even more tyrannical force which lies pent up within their countries. North Korea and Iran want Americans to believe that an even nastier faction is waiting in the wings. Accommodation with the people in power is the only way to prevent the truly bad people from taking over.

Bolton’s conclusion is blunt but is widely shared. That these people more often than not exist largely for dramatic effect and take life largely in the whispered threats of the negotiating room.

In this case, it seems Zarif wants to convince an already sympathetic Biden administration to give him and his government what they want, and to discount Iran’s imperialism as the work of other people. The tactic seemed to work in previous nuclear negotiations. Rouhani’s term of office expires this year. Perhaps the old chestnut can secure him and Zarif another victory before they leave office.

James Snell is a British writer whose work has appeared in numerous international publications. Follow him on Twitter @James_P_Snell.