Donald Trump’s Afghanistan Withdrawal Is A Major Windfall for China 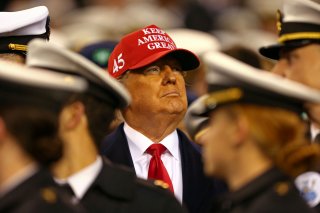 Publicly, President Donald Trump justifies the U.S. withdrawal from Afghanistan as responsible leadership, and the White House says it will calibrate its drawdown to Taliban compliance. That is fiction. Behind-the-scenes, not only the intelligence community, but also senior Trump administration officials privately treat the February 29 peace deal as an empty agreement accepted only to make withdrawal more palatable. In reality, they say Trump’s frustration with the “endless war” in Afghanistan has more to do with his desire to stop spending approximately $50 billion each year to support military operations in Afghanistan and to redirect it to countering China, a problem for which he now has laser focus.

On a macro-level, that makes strategic sense. The irony, however, is that by effectively abandoning Afghanistan, Trump is giving Beijing not only a huge strategic asset, but also a $140 billion gift on the way out. That’s the amount that U.S. taxpayers have contributed to Afghanistan’s reconstruction as of July 2020, and does not even account for the military cost of operations. It is equivalent to almost $425 for every American man, woman, and child.

This is not to bash the U.S. decision to intervene militarily in Afghanistan: The Taliban’s Islamic emirate had broken promises it had struck with Madeleine Albright’s State Department during Bill Clinton’s second term as it hosted Al Qaeda training camps. Much to the detriment of those backing Special Envoy Zalmay Khalilzad’s deal, the Taliban are even more intertwined with Al Qaeda today than they were in the run-up to the 9/11 terrorist attacks. Diplomats might solicit promises from their interlocutors in Qatar that the Taliban will decouple itself from Al Qaeda, but translating this into reality would mean fathers breaking from sons and brothers from brothers. The fault of the United States was not fighting those enabling or offering space to Al Qaeda but rather subsequent nation-building efforts which worsened Afghanistan’s systematic corruption.

Not all the $140 billion U.S. reconstruction investment has been wasted. Since 1997, I have traveled repeatedly to Afghanistan, both before the Taliban take-over of certain areas, then in areas under the control of the Taliban’s pre-9/11 “Islamic Emirate,” and finally in areas now controlled by the postwar Islamic Republic of Afghanistan. Roads which took days to traverse now take hours (when security threats do not impede travel). Airports and airlines function. There is electricity, water, and health facilities. Schools operate for boys and girls. A new generation of Afghans have hope for the future, no matter how frustrated they are both with venality and corruption within their own governing class and the Taliban’s medieval vision.

That basic foundation upon which a new Afghanistan will be built is what Trump now seeks to gift to the Chinese. China has long sought to get its foot in the Afghan door. In 2008, Afghanistan’s ministry of mining awarded China’s state-owned China Metallurgical Group Corporation and the Jiangxi Copper Company Limited a $3.4 billion contract to operate a copper mine in Aynak after Chinese agents allegedly bribed Afghan officials, a good deal for China given that Aynak’s copper reserve is potentially worth upwards of $50 billion. A decade later, the mine whose revenue will be needed if Afghanistan will stand on its own, had not yet begun to operate.

Then there is oil: China’s $400 million bid for oil in three Amu Darya basin exploratory blocks produced oil within two years before work abruptly stopped in 2013. Some accounts suggest China sought both bids simply to preempt other countries from gaining the concessions. Washington’s long-term vision seldom extends beyond four years, but China plays the long game.

China’s strategy may pay off. Beijing appears ready to fill the vacuum left by the United States and invest in Afghanistan in a predatory way which the United States never did. China has long sought to monopolize commodities and rare earth elements. Chinese officials are well aware of the 2010 U.S. Geological Survey and Defense Department Task Force for Business and Stability Operations report that estimated that Afghanistan possessed $1 trillion worth of untapped minerals. A 2010 internal Pentagon memo stated that Afghanistan could potentially become the “Saudi Arabia of lithium” Lack of infrastructure hampers extraction, but China is patient and U.S. withdrawal may be what Beijing has been waiting for. Rather than bolster the stable, democratic Afghanistan which Washington envisioned, Chinese investment after the U.S. exit could enable Beijing to prop up kleptocratic clients much as it has in Africa.

The groundwork is already there. Afghanistan is among the 138 countries that have signed a Belt and Road Memorandum of Understanding with China, even as it has so far resisted formally joining the Belt and Road Initiative. That, of course, will likely change as the United States withdraws. In a 2014 speech at Xinhua University in Beijing, for example, President Ashraf Ghani stated that “China is a strategic partner for us on multiple levels, this trip is based on that previous foundation, but it's about deepening and broadening of this relationship, making the new silk road happen.” Wang Yu, China’s ambassador to Afghanistan, continues to talk up the Belt and Road Initiative’s expansion in Afghanistan.

China has repeatedly stated its desire to extend the China-Pakistan Economic Corridor (CPEC) into Afghanistan. CPEC is the “flagship” of the Belt-and-Road project. Afghanistan’s geographical location could make it the key node between CPEC and central Asian countries. Afghanistan may be mountainous, but China can build upon the billions of dollars the United States has spent repaving Afghanistan’s ring road and the spokes which then extend to Afghanistan’s various border crossings. China has already built a railroad connecting China, Afghanistan, and the Central Asian republics, and Beijing has offered both the Afghan government and the Taliban assistance in building an additional road network. A Taliban leader in Baluchistan, who spoke to the Financial Times after a month in Afghanistan, said China had pledged to build motorways that would link Afghanistan’s main cities: “The Chinese promise is led by a road network across Afghanistan. Once such a network is built with six-lane highways, the Chinese have said local commerce and trade will flourish.” This is consistent with Taliban statements which have argued that militants should not attack Chinese-funded projects that benefit their vision of an Islamic emirate. Pakistani foreign ministry officials confirmed that Chinese officials had continued to meet the Taliban as Trump began withdrawing troops.

China’s involvement in Afghanistan would not end with Afghanistan, but rather will be a force multiplier for Chinese allies and American adversaries regionally. Pakistani Prime Minister Imran Khan has already transformed Pakistan into an effective Chinese vassal state. While it is true that, from 2005 until today, China’s investment in Pakistan has been more than an order of magnitude greater than in Afghanistan, the U.S. withdrawal will simply allow China and Pakistan both to increase their leverage in Afghanistan. For both Beijing and Islamabad, an unhampered economic and diplomatic push into Afghanistan would be a force multiplier and a means to win in what they perceive to be a zero-sum game with the United States and India. Nor would such a game end at Afghanistan’s western frontier: Solidifying its economic hold over Afghanistan would also help China further its ambitions in Iran.

Just under a year ago, Alice Wells, the former principal deputy assistant secretary of State, declared while at the Woodrow Wilson Center that “China has not been a real player in Afghanistan development.” That may have been true in the past, but as the United States withdraws, Beijing appears to be changing its Afghan calculus. Chinese aid, a barometer of Beijing’s interest in Afghanistan, is on the upswing. Within the past decade, China has pledged ever-increasing amounts of aid to Afghanistan In 2014, China pledged $327 million in aid to Afghanistan through 2017, an amount larger than China’s total aid between 2002 and 2014. Its post-2017 aid may be even greater.

Trump is right that the United States must confront China’s ambitions, and Mike Pompeo’s greatest legacy as secretary of State might be less advancing peace in the Middle East and Balkans and more changing the conversation in Washington and around the world about the threat China poses. How unfortunate it is, then, that in the rush to leave Afghanistan, Trump may be squandering the billions of dollars already invested while simultaneously fulfilling Beijing’s dreams.