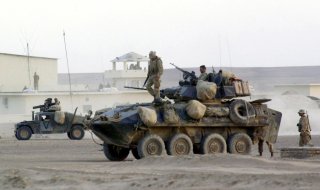 In his remarks following American forces’ final withdrawal from Hamid Karzai International Airport in Kabul, Marine Gen. Kenneth McKenzie, commander of U.S. Central Command, confirmed that U.S. forces had sabotaged more than one hundred ground vehicles and aircraft before its departure, to prevent them from falling into the hands of the Taliban.

Prior to their final departure, U.S. troops sabotaged dozens of Humvees, seventy “MRAP” armored vehicles worth $1 million apiece, and seventy-three aircraft. McKenzie described the aircraft as “demilitarized,” adding, “Those planes will never be able to take off again.”

Before the Afghan government’s collapse, the Afghan Air Force operated more than 150 aircraft out of Kabul. The operation of its aircraft, however, was heavily dependent on U.S. technicians and maintenance crews. During the withdrawal, many of these crews were withdrawn, grounding Afghan pilots’ aircraft.

The U.S. also disabled its two C-RAM counter-missile systems, which had been used to protect the airport from a series of rocket attacks conducted by the Islamic State’s regional affiliate group, ISIS-K, on August 30. According to McKenzie, the battery had been left intact “until the last minute” to protect evacuating U.S. troops from further missile attacks: “Destroying these systems is a complicated and time-consuming procedure, so we disabled them so that no one can use them anymore.”

The general added that while the U.S. could have dismantled the C-RAM systems and returned them to the United States under better circumstances, the decision was made to destroy them instead in order to meet the Taliban’s withdrawal deadline. “We feel it’s more important to preserve our forces,” McKenzie explained, “than [to] bring those systems back with us.”

The airlift to evacuate U.S. and Afghan civilians from the airport moved more than 120,000 people out of the country in just over two weeks, according to a recent statement put out by the White House. If these numbers are accurate, the Kabul evacuation will have been the largest airlift in history.

While the aircraft and vehicles remaining at the airport were disabled, the Taliban still gained a vast arsenal from the surrendering Afghan National Army, most of it provided by the United States. The U.S. military provided the Afghan security forces with 600,000 infantry weapons, 162,000 sets of communication equipment, and 16,000 night vision goggles, according to the Special Inspector General for Afghan Reconstruction—most of which has since been passed on to the Taliban. The group has also taken possession of fixed-wing aircraft and helicopters, although they are certain to face the same challenges in operating them that the Afghan Air Force had.