ISIS-K: What We Know About the Perpetrators Behind the Kabul Airport Attack 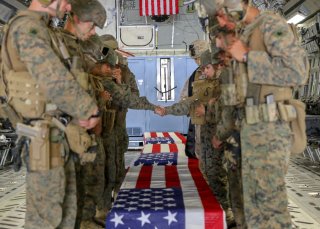 A suicide bombing on the Kabul airport Thursday claimed the lives of thirteen U.S. soldiers and, as of the latest tally, more than 170 Afghan civilians. The culprit for the attack was quickly identified as “ISIS-K,” or the Islamic State terror group’s faction in "Khorasan Province" in Afghanistan.

ISIS has largely remained out of the news since its loss of territory in 2017 and 2018 and the death of the group’s self-proclaimed “caliph,” Abu Bakr al-Baghdadi, in a U.S. military raid in 2019. However, the main “state” in Iraq and Syria established a number of affiliate groups around the world, including in Yemen, West Africa, and Afghanistan, which the group describes as Khorasan, a historical name for the region of Afghanistan and eastern Iran.

The latter province, dubbed ISIS-K, was created in 2015 and has continued to operate in Afghanistan, even after the territorial defeat of the parent group in Iraq and Syria. While it has largely played a minor role in the conflict between the Taliban and the Afghan government, it has been the target of military action before, notably President Donald Trump’s decision to drop a “massive ordnance air blast” (MOAB) bomb, the largest non-nuclear explosive in the U.S. arsenal, on a cave complex belonging to the group in 2017.

ISIS-K has been strongly opposed by the Taliban in Afghanistan. A major point of contention between the two sides has been the issue of nationalism, as the Afghan Taliban is committed to governing the nation of Afghanistan rather than taking the more extreme position of attempting to eliminate national borders and create a worldwide caliphate, the stated objective of ISIS.

Despite these disagreements, ISIS-K is known to have had ties to Tehrik-i-Taliban Pakistan (TTP), a terror group that has sought to establish an “Islamic state” of its own in Pakistan. As the TTP is nominally loyal to the Afghan Taliban, and its leaders pledged their allegiance to “Commander of the Faithful” Haibatullah Akhundzada, it is unclear whether these ties will be maintained. However, many Pakistani Islamists have joined ISIS-K, and the group has at times had a presence in Pakistan’s largely ungoverned western areas.

How much of a danger ISIS-K really poses to the United States is unclear. The group appears to be primarily focused on expanding its presence in Afghanistan and Pakistan, rather than attempting to launch high-profile terror attacks, as ISIS did during its existence. The Kabul airport bombing appears to be an exception to this rule, and the U.S. has already launched reprisal attacks targeting the group’s positions.